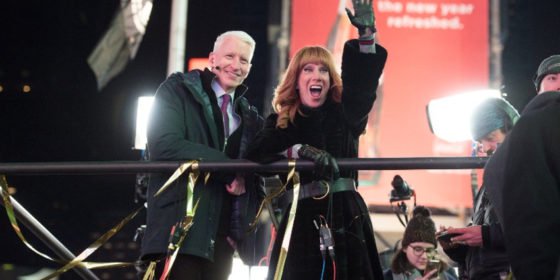 They won’t be co-hosting CNN’s New Year’s Eve coverage together anymore but Anderson Cooper still considers Kathy Griffin to be a friend.

‘She and I have been friends for a long time, and I want nothing but good things for her,’ Cooper said over the weekend during a live show with Andy Cohen in Phoenix, Arizona.

Griffin was fired from the CNN gig after more than a decade in the aftermath of severe backlash over a photo she posed for with what appeared to be a decapitated Donald Trump.

Cooper publicly criticized the comic on Twitter: ‘For the record, I am appalled by the photo shoot Kathy Griffin took part in. It is clearly disgusting and completely inappropriate.’

Griffin was clearly hurt by Cooper’s words. She could only manage to silently shake her head no at a 2 June press conference when asked if she had spoken to Cooper since CNN fired her.

‘I think when you’re friends with somebody you can say that,’ Cooper said in defense of his tweet.

He added: ‘I wish her well, and I hope she bounces back and keeps doing what she does best, which is make people laugh.’

The two had not only been a successful television team for more than a decade, they have also been personal friends, appeared on each other’s talk shows and even did a CNN pilot together.