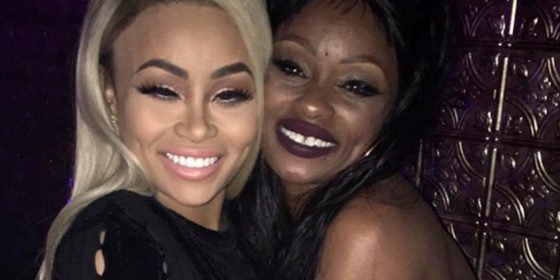 Commenting on the unfolding drama with her daughter and Rob Kardashian, Toni called Jenner ‘a man, dressing and pretending to be a woman.’

‘Hold up, hold up,’ she starts. ‘Did I just wake up to some motherfucking hot, steamy pissy-smelling tea?’

‘This motherfucking n***** – cos he’s a man, dressing and pretending to be a woman,’ she said.

Tokyo Toni then put on a pretend voice, mocking the lower register and urging Jenner to get a vocal coach.

She continued: ‘You gonna lie and say you don’t know Blac Chyna? N***** you was walking around switching in the park with me, you fucking faggot.

‘Call me bitch, I got some words for you ass,’ she also said.

Rob Kardashian posted nude photos and screenshots of conversations with Chyna after allegations of cheating.

Toni was responding to comments Jenner made while on The View last week, calling her step-son ‘stupid’ for his very public outbursts.

Jenner also said she had never even met Blac Chyna or her child, Dream. Toni disputes these claims in the now viral video, which she has since deleted.