The red dirt of a harsh outback landscape scattered with emus and kangaroos is an easily recognizable image of Australia.

Another image we often see in Australian cinema is the quiet country mining town. A place where locals are wary of strangers and gather in the local, crumbling pubs.

One such film was the iconic, The Adventures of Priscilla: Queen of the Desert. It’s the story of three road tripping drag queens making the arduous trek from gay friendly Sydney through some of Australia’s most remote desert towns until they land at Uluru.

One of the most memorable scenes in Priscilla happens in Broken Hill, an isolated mining town in western New South Wales. It’s where the queens bravely hit the now-iconic Palace Hotel dressed in full drag to drink the locals under the table.

Broken Hill is pretty much in the middle of nowhere. | Photo: Broken Heel Festival.

But their stay is not so welcoming, when they come to find their travel bus – Priscilla – vandalized with the words ‘AIDS FUCKERS GO HOME’ the next morning.

Seems like a great place to host a big, gay festival, right?

It’s this impression of Broken Hill that makes it an unlikely spot to host one Australia’s most epic and ridiculously camp drag festivals.

I’d heard about the Broken Heel Festival in its first couple of years. It was a three-day festival held at the Palace Hotel, jam packed with drag performances every night.

I imagined it would be a small-ish event held in the back of the pub where a handful of people would make the event to attend to be entertained by local queens.

But how wrong I was.

My time at the Broken Heel festival this year was a memorable adventure full of art, friends, food and of course drag queens.

So you think you can drag?

The Broken Heel festival was the genius concept of local Esther La Rovere, who has festival directing experience in the United Kingdom.

The setup is pretty simple: block of the street along the famous Palace Hotel, set up two separate stages for performances, have big bars churning out the drinks and a food stall in the middle of it all to keep punters fall and happy.

People start pouring in to Broken Hill on the Thursday before the festival, but it’s on the Friday night when the party kicks off.

The street party on the side street was host to the main stage, skilfully hosted by Melbourne drag queens, Art Simone and Philmah Bocks, who must be absolutely credited for the raging success of the festival.

Friday was also the first heat of So You Think You Can Drag?, where baby queens from across Australia battled it out to snatch the crown.

It was camp block party with something for everybody, including being home the original Priscilla bus and giant stiletto from the first stage production of the story. The main stage backed on to the dusty hill of the town’s memorial to mineral mining, the industry that put Broken Hill on the map.

It certainly wasn’t below organizers to have a singer perform the Follie i Trava from Traviata on top the silver stiletto, much like Guy Pearce in the film as fireworks works went off in the sky behind him.

The second heat of the competition was held during the day on Saturday in Broken Hill’s main square. The square was at capacity with curious locals and queer spectators cheering the hopefuls on.

Art and Philmah continued to keep the crowds entertained, even managing to keep their schtick PG friendly for all the families present.

Next the crowd filed onto Broken Hill’s main street for what was a small, but was made up for in enthusiasm, street parade featuring performers, drag queens, the Irish Australian LGBTI group for some reason and like any good Pride parade, the dykes on bike. 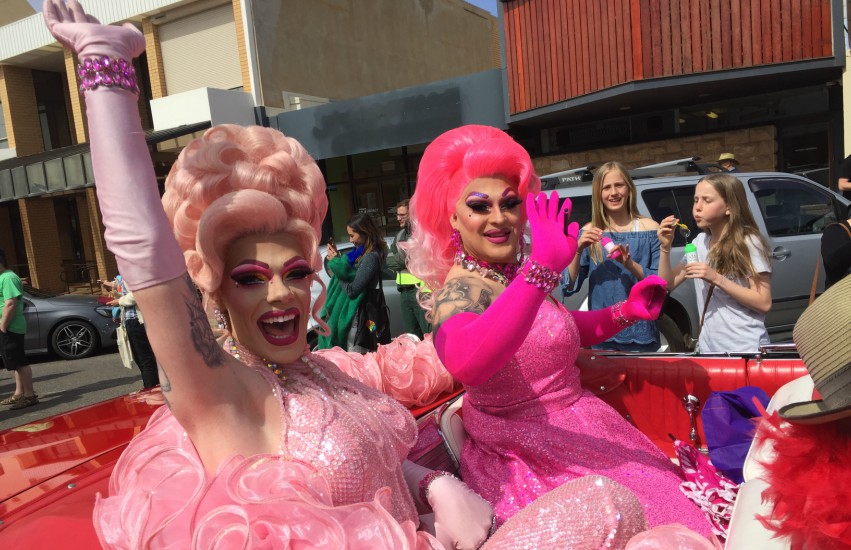 Working my way up and down the parade to talk to both participants and spectators was definitely one of the best parts of the Broken Heel festival. Everyone was happy, curious and definitely keen to join in on the fun.

How to get there

Broken Hill is in a remote part of Australia’s desert, but that doesn’t mean there aren’t plenty of options on how to get there.

If spending 14 hours on a train entertained by drag queens, playing bingo, getting boozy and having non-stop sing-alongs, then I recommend getting the Silverton Stilleto train from Sydney. The cost of the train tickets also include a three-day festival pass.

A special commissioned train from Sydney the train’s three carriages are named after the queens in Bernadette, Mitzi and Felicia.

The Silverton Stilletto train in a unique way to get to the Broken Heel Festival for a number of reasons.

Firstly, it’s a camp experience which gets you in the mood for the revelry ahead.

But it’s especially cool, because it must be one of the few trips you can take where you experience the diversity of Australia’s landscape in one hit. From the sprawl of Sydney’s urban metropolis, to snaking through the majestic Blue Mountains, rolling green hills to finally that iconic red desert, it truly is a breathtaking ride.

The train also stops at country towns along the way. These train stations were packed with excited locals there to greet passengers on their way to the festival.

When the train (finally) pulls into Broken Hill, passengers are greeted by a huge welcoming party of locals, drag queens and complimentary fruity cocktails. Truly fabulous.

The train station is very close to the Palace Hotel and most of the accommodation options, so it is easy to walk or get a short taxi trip to wherever you need to go.

Melbourne is *only* about a ten hour drive from Broken Hill and can be a lovely trip through the Victorian countryside. Most people stopover in the town of Mildura which has a renowned culinary scene and well worth a visit.

Yarra Valley coaches also provides a specialized service to and from Melbourne every year.

If you’re driving, just be careful at dusk. It’s the time of day the kangaroos are roving around and cause a lot of damage to your car if you’re unlucky enough to hit one.

But be sure to book your flights well in advance, because they sell out quickly.

Continuing to defy all stereotypes of a remote country town, Broken Hill has no shortage of fantastic food options.

One stand out breakfast and lunch option was The Silly Goat Cafe on Argent St. A place so hipster it would give Brooklyn and Shoreditch a run for its money. Serving my quinoa in an overturned glass vase may have been a bit much, but the food and coffee was superb.

For fine dining options, S-Que is the hottest ticket in town. Located within the Ibis Styles hotel, the restaurant has an international menu with a high rotation of mouth-watering specials. But as one of the most popular dining options in Broken Hill, booking in advance is essential.

The Palace Hotel is an obvious choice for accommodation during the festival. The only downside of staying there is that the party never stops. Noise from the performances and music permeate through the walls, not leaving much options for quiet downtime.

I stayed at the Ibis Styles hotel which was only a five minute walk from the main festivities. The staff were friendly and the rooms were pretty decent.

The only obvious downside to the 2017 festival was an extremely heavy-handed police presence.

It became clear the police presence was excessive on the subdued Sunday night after an interactive screening of Priscilla. Police came through the Palace Hotel with sniffer dogs that night.

Many festival-goers told me they felt profiled and also made to feel like criminals.

Detective Inspector Michael Fuller defended police tactics telling Gay Star News that nobody complained to the police during their patrols at the festival, which ‘tells me people were happy to see the police’.

‘But we’re happy to talk to the organizers to look at opportunities to tweak or enhance things,’ he said.

Fuller said the festival went well from a police perspective without ‘any incidents relating directly to the festival’. There were also no drug related offences.

Broken Hill isn’t just a town where some famous drag queens stopped in for a visit twenty years ago.

I’s a famous arts hub with a thriving and diverse scene. The world famous Pro Hart was from Broken Hill. Tours to local galleries and artists are available and an interesting way to spend an afternoon.

About 20 minutes drive away is the former mining town of Silverton. The festival goes to Silverton on the Sunday where the queens perform, but it’s also worth a visit separately. It’s home to a Mad Max museum and several local art galleries.

Obviously, you’ll have to go next year

Despite the number of police at the festival, Broken Heel was truly a once in a lifetime unique experience.

Anticipating a high demand in 2018, festival organizers have already released next year’s festival guide and some early bird tickets.

The Broken Heel Festival is an essential event. It’s not only for lovers of drag but for all people who like a party with a twist.

Locals were friendly and open to learning about the LGBTIQ community.

But most importantly this is a very fun festival where people from very different walks of life to celebrate their town, drag, and of course, Priscilla: Queen of the Desert.

This visit was supported by Destination NSW and information on accommodation, travel or attractions in Broken Hill can be found at www.visitnsw.com.