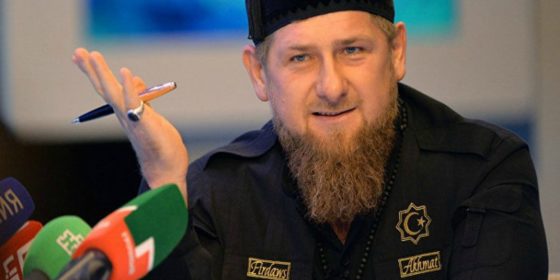 Leader of Chechnya, Ramzan Kadyrov, again denied reports of gay people in the Russian republic, but said if there were any, they should all move to Canada.

He also said they’re ‘devils’ and ‘they are not people,’ according to Out Sports.

Kadyrov answered questions from HBO’s David Scott, who raised the torture and killing of gay men in the Russian republic.

Scott asked: ‘I wanted to ask you about the alleged roundup, abduction, and torture of gay men in the Republic.’

To which Kadyrov replied: ‘Why did he [Scott] come here? What’s the point of these questions?

‘This is nonsense. We don’t have those kinds of people here.

‘We don’t have any gays.

‘If there are any, take them to Canada.

Praise be to God. Take them far from us so we don’t have them at home. To purify our blood, if there are any here, take them,’ he said.

When pressed on the matter further, he continued: ‘They are devils. They are for sale.

‘They are not people.

‘God damn them for what they are accusing us of. They will have to answer to the Almighty for this,’ Kadyrov said.

The full interview will air Tuesday 18 July on HBO.

Russia’s Novaya Gazeta published the names of 27 gay people tortured and killed in Chechnya. They also reported shocking details of the killings, including the date they were murdered in late January.

‘According to our information, the detainees were shot that night and have carried on various cemeteries, including Christian, and buried in hastily dug graves,’ the Novaya Gazeta reported.

They believe the investigation into these crimes as come to a halt, so they published the names to renew exposure.

The report stated: ‘Today it is obvious that the Investigative Committee of Russia is losing ground on this situation… That is why we publish the list of those who, according to our information, were victims of the worst possible extrajudicial executions in Grozny.

‘And now the investigation, which has a lack of living of witnesses, will have to deal with the special witnesses.

‘Because only the dead have nothing to fear in Chechnya’