Nine LGBTI activists were held by police in China after they want to hold a LGBTI rights conference in the northwestern city of Xian.

According to a Reuters report police told the activists from the group, Speak Out, Xian did not welcome gay people.

In the morning before the event, nine of the organizers were detained by police for eight hours. They were then questioned for a number of hours before police released them.

‘In those eight hours, we were completely cut off from the world – we were clearly told, ‘LGBT events can never be held in Xi’an,’ ‘Xi’an does not welcome LGBT events,’ and other such warnings,’ the events curator wrote on microblogging site Weibo.

According to the curator they were forced to hand over their cell phones and passwords to police. They were also not allowed to contact anyone.

‘They were very clear in telling us we couldn’t organize activities in Xian again, and that they didn’t welcome gays,’ organizer Matthew told Reuters.

Police did not respond to media enquiries and did not tell the organizers why their LGBTI event could not be held in Xian.

Venues also cancelled Speak Out’s booking in the lead up to its LGBTI conference, making it hard for the group to find somewhere to host the event. 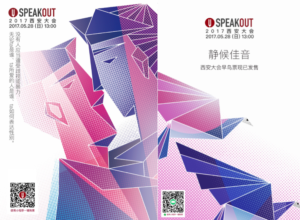 A flyer from the cancelled event in Xian.

Commentators have suggested the LGBTI community in China would be bolstered by Taiwan’s recent decision to allow marriage equality. But Matthew said it was unlikely there was any link to Taiwan’s decision and his event being shut down.

‘Some people around me have said this to me, but I think the effect of Taiwan on the Chinese mainland is very limited,’ he said.

People took to Weibo – the Chinese equivalent of Twitter- to express their views about the detention of the organizers.

‘Look at Taiwan, and then go look at Xian,’ one person wrote on Weibo.

Homosexuality is not illegal in China and despite having a thriving LGBTI scene in many place, it can still be conservative in some parts.