Set up in 2012, Rela is ‘the best lesbian social app worldwide with over 6.5 million gals — chatting, friends making, live broadcasting,’ according to their now inactive Facebook page. 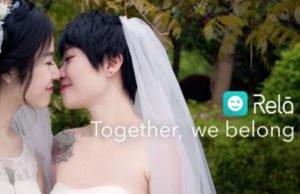 According to Reuters, users reported the service was ‘temporarily suspended’ when they tried to login. An error message read: ‘Rela has always been with you and please await its return!’

Users took to Weibo, a popular Twitter-like Chinese app to vent their frustrations.

One commented: ‘This is discrimination against us lesbians.’ Another wrote: ‘Not being able to open it feels like being jilted.’

All attempts to download or use the app fail.

Possible theory into the suspicious shut down

One possible reason for the mysterious shut down may lie a protest gone wrong. Rela participated in a controversial protest at Shanghai’s popular ‘marriage market’ at People’s Park, Shanghaiist reports.

The ‘marriage market’ is an event where elderly parents search for suitable partners for their unwed sons or daughters.

Rela was one of the groups to send mothers of LGBTI children to the event to raise awareness for gay rights.

The Shanghaiist also reports: ‘The moms were kicked out of the park by security for failing to register their “advertising event” after other parents raised a ruckus.’

The news of the shut down of the Chinese lesbian app comes out after China’s neighbor, Taiwan, legalized same-sex marriage.

Gay Star News approached Rela for comment but have yet to hear back.