Making a speech at the White House Correspondents’ Dinner, she aimed fire at Donald Trump, Ivanka Trump, Mike Pence and then Kellyanne Conway.

On Mike Pence, she said: ‘Mike Pence is what happens when Anderson Cooper isn’t gay.’

The press secretary, who was present at the dinner and representative of the administration, looked uncomfortable when joke after joke came her way. 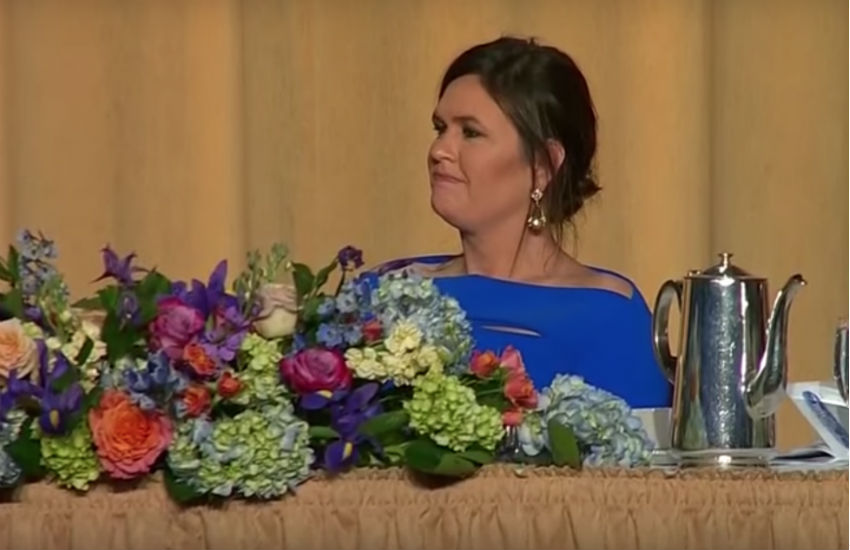 Wolf said: ‘I have to say I’m a little starstruck – I love you as Aunt Lydia in the Handmaid’s Tale.’

She also said: ‘Every time Sarah stands up to the podium, I get really excited because I’m not sure what we’re gonna get. A press briefing, a bunch of lies or divided into softball teams.’

But it’s a joke about her make up that’s causing a stir online.

Wolf joked: ‘I actually really respect Sarah – I think she’s really resourceful. She burns facts and then she uses the ash to make that perfect smokey eye.

Many Republicans took to social media to condemn Michelle Wolf for her ‘unfair’ comments on the press secretary’s appearance.

Because only Liberals and the Media can make fun of a woman’s appearance and it’s OK. Offensive comedian “Michelle Wolf” compared our amazing female @PressSec to a dowdy movie character “Aunt Lydia”. These people disgust me and most decent Americans to the core…#WHCD #AuntLydia pic.twitter.com/vdYJtZI61H

In response to the ‘unfair’ jokes about Sarah Huckabee Sanders, Wolf took to Twitter to explain herself.

White House correspondent to the New York Times Maggie Haberman tweeted: ‘That @PressSec sat and absorbed intense criticism of her physical appearance, her job performance, and so forth, instead of walking out, on national television, was impressive.’

To which Wolf quote-tweeted: ‘Hey mags! All these jokes were about her despicable behavior. Sounds like you have some thoughts about her looks though?’

What do you think of the roast?