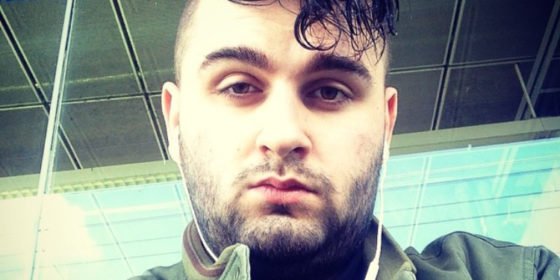 A London-based singer songwriter has spoken to GSN about the inspiration behind his latest track, Hurt.

The song, which was released during Mental Health Awareness Week in May, painfully details being in a physically abusive relationship, and the impact it had on its creator’s mental health.

Thomas Barry performs under the stage name of Travie Redz. He wrote the song reflecting on a relationship he got involved in at the age of 17.

Thomas men the slightly older man through a mutual friend. At first, things seemed OK, but as time went on, arguments between them became more and more frequent.

After a year together, arguments spilled over into violence. He says he was sometimes too embarrassed to go home or get on public transport because of the bruises on his face.

‘There is rarely many males that discuss domestic violence’

‘I penned the track in March of this year and really wanted to personalize this song about the relationship,’ Thomas said in a statement.

‘All my music is about life experiences, either from myself or my family. I think the song is so important because there is rarely many males that discuss domestic violence compared to women. It is so important to break that barrier.

‘The first part of the song is about when you are in a relationship, your friends can see how bad it is for you, but at that time you don’t want to hear it. You try and paint a pretty picture of the relationship to them, yet deep down you know that what they are saying is right.

‘You will feel better once you are out of it’

‘Also in the song, the lyrics are purposefully quite graphic as I wanted to demonstrate how physical the abuse becomes, for example, I talk about punching, hitting, bleeding and crying.

‘The second part of the track is about breaking away out of the relationship and moving on, and knowing you can move on and you will feel better once you are out of it.

‘I do believe my mental health was compromised in that relationship mainly because I didn’t want to share my thoughts with anyone else in case I felt judged for my decisions. That is when you are in danger – when you feel you can’t open up to anyone else.

‘It doesn’t have to be physical abuse for your wellbeing to be challenged either – it could be emotional/verbal abuse also, which can start quite subtly but you brush it under the carpet.

‘I am 24 years of age now and with the benefit of looking back, I realize how important it is to have a strong network of friends and family that know you when you are at your happiest, and so can identify the situations that don’t make you happy.’

Thomas says that throwing himself into music has helped him. He’s been producing his own material for the last five years, influenced by the likes of Sam Smith and Amy Winehouse.

He has also sought help from the charity, Find A Balance. Its aim is to help young people overcome mental health challenges.

Unfortunately, the UK’s only dedicated charity for LGBTI victims of domestic violence, Broken Rainbow, closed earlier this year due to funding difficulties. Galop runs an LGBT Domestic Abuse helpline at 0800 999 5428.

Samantha Francis of Find A Balance, said, ‘Domestic abuse is certainly one of the key factors that compromise mental wellbeing. Within a same-sex male relationship, this abuse can place the victim in a higher risk situation due to the stigma attached to male abuse and mental illness combined.’

In a phone call to GSN, Thomas says that he was prompted to get out of the relationship after confiding to a friend about what was going on.

‘She had basically been in a similar situation. And we were talking about everything until about 4am one night. And she said I needed to leave him. Even then, it took me about four weeks to build up the courage to leave.’

Asked if had advice for others who find themselves in a similar position, he says the first step is telling someone else what’s happening.

‘Speak to someone. Besides your friends and family, there are charities out there, like Find A Balance, which can help you. They’re still helping me now.

‘Physical abuse heals but memories take longer, and for something like that, talking about it has helped.

‘Today I would say I’m better than I’ve ever been. I’m at a stage where my day to day life is what I want it to be. Compared to where it was back then, I wouldn’t be where I am without speaking to friends and to a charity.’

Need help? Try these helplines for recommendations of charities or non-profits that might be able to support you.