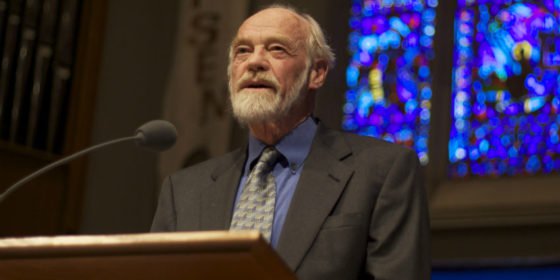 An ex Protestant Pastor has changed his mind after previously saying he would perform a same-sex marriage.

Eugene Peterson did an interview for the Religious News Service. He was asked that if a ‘gay couple in your church who were Christians of good faith’ asked him to perform their wedding ceremony, would he?

His response was yes.

He also told of how a gay man announced his sexuality when applying for position of music director at his congregation.

‘I was so pleased with the congregation. Nobody made any questions about it.’

Peterson added the ‘kind of debate about lesbians and gays might be over. People who disapprove of it, they’ll probably just go to another church.’

He explained while he doesn’t think ‘it’s something that you can parade, but it’s not a right or wrong thing as far as I’m concerned.’

In response to his comments, it was reported America’s largest Christian retail chain was considering halting sales of Peterson’s book.

‘Frankly, I hope I never am asked’

The ex-pastor has now gone back on this comments and retracted his stance on same-sex marriage.

Despite previously saying he would perform a same-sex marriage, Peterson stated: ‘I’ve never performed a same-sex wedding. I’ve never been asked and, frankly, I hope I never am asked.’

In response to his previous comment, Peterson  explained: ‘When put on the spot by this particular interviewer, I said yes in the moment. But on further reflection and prayer, I would like to retract that. That’s not something I would do out of respect to the congregation, the larger church body, and the historic biblical Christian view and teaching on marriage.

‘That said, I would still love such a couple as their pastor. They’d be welcome at my table, along with everybody else.’