Facebook banned the page of a popular anti-gay group in Singapore, but then reinstated the page the following day.

The We are against Pinkdot in Singapore (WAAPD) has long been vocal opponents of Singapore’s annual pride event, Pink Dot. It has almost 7,000 members.

It also regularly posts anti-LGBTI content including, the time a man thought a baker was spreading the ‘gay agenda’ with a rainbow cake he was selling.

WAAPD describes itself ‘as a public policy group, it stands against the normalization of homosexuality within Singaporean society’.

Roy Tan, 60, had consistently tried to report the group to Facebook for hate speech. On Wednesday (9 March) a friend notified him that Facebook had blocked the page.

But less than a day later WAAPD was back up and running. Facebook sent a message to administrator’s saying the page was removed in error.

The page’s moderator, Azman Ivan Tan, shared the news on the page and warned its members to be ‘nicer’ when posting content.

‘The problem is that we don’t follow rules or be civil. Please check your postings and be nice. Discuss on facts and not emotions,’ Tan wrote.

‘Ps: I know some of you went crazy when the group went away. So check ourselves. Let this be a lesson/reminder that we need to be the bigger ones. Be the nicer ones.’ 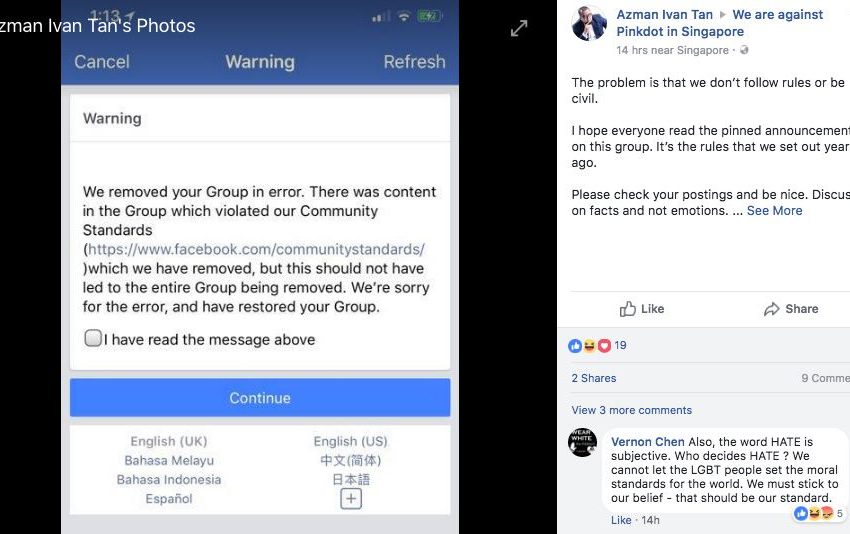 Photo: Facebook/We are against Pink Dot in Singapore

A Facebook spokesperson said the company should not have removed the page entirely, only some of its post which violated its community standards.

‘There was content in the group which violated our policies, which we have removed, but we should not have removed the group in its entirety,’ the spokesperson told Yahoo Singapore.