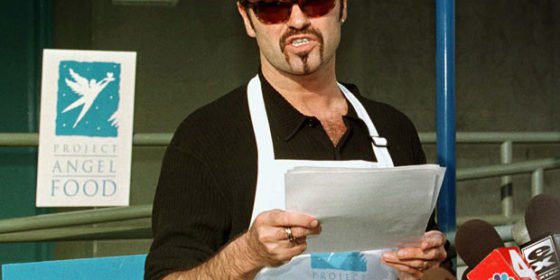 The late singer George Michael will be honored posthumously next month with an award from Project Angel Food, a charity he supported for many years.

Singer Adam Lambert will perform a medley of the gay icon’s greatest hits at the gala.

Michael was Project Angel Food’s top benefactor for many years, the nonprofit revealed shortly after his death last Christmas.

‘His quiet generosity helped us, year in and year out, and brought so much goodness to thousands of people we serve,’ said executive director Richard Ayoub on the group’s website.

‘Just keep doing what you are doing, Love, George’

In 1993 during the height of the AIDS epidemic, Project Angel Food was struggling to buy food to feed its clients and even having trouble paying its staff of 14 people.

One afternoon, they found a brown envelope on the doorstep with a handwritten note from George Michael which read, ‘Just keep doing what you are doing, Love, George.’

He donated that same amount every year until his death. In 1998 following his arrest on lewd conduct charges, Michael did his community service time in the Project Angel Food kitchen and also delivered meals.

Over the years, the group has expanded its scope to also provide medically tailored meals for people battling other life-threatening illnesses such as cancer, kidney failure and heart disease.