Dressed to the nines in a high rise London restaurant, a gorgeous (and hungry) Courtney Act tucks into a humble mound of pitta: a reliable option for a committed, animal-loving vegan like her.

‘There were vegan treats at Tom Daley and Dustin Lance Black’s baby shower last weekend,’ says the star of her famous friends. ‘They’re vegan as well. At their New Year’s Eve party, I couldn’t even speculate what time, I remember Lance cooking vegan chicken nuggets for a group of us huddled around the kitchen!’

The RuPaul’s Drag Race season 6 finalist furthermore reveals that she met a handsome stranger at the guys’ NYE bash. ‘It was fun!’ she reminisces. ‘Alaska and I went. I met a boy there who I’m currently dating, which is lovely.’

‘I haven’t had much success with online dating’

Not that this technically means Courtney, also known as Shane Janek, is off the market. The star identifies as polyamorous (plus pansexual and gender-fluid) and is on dating apps – albeit, she rarely uses them.

‘That’s not a party line!’ laughs the 36-year-old, who first found fame on Australian Idol in 2004. ‘I haven’t had much success with online dating, apart from one boyfriend. I find it too tedious. I’d much rather meet people through friends; real-life connections are easier to gauge.’

It’s amazing to meet her in real-life: she’s the same as she was on Celebrity Big Brother (which she won) in February: warm, funny, intelligent and fiercely opinionated.

We sat down with Courtney last month ahead of the UK stretch of her tour Under the Covers. Here, she talks ‘tiresome’ RPDR lingo and RuPaul’s controversial comments about trans women…

What can fans expect from your tour?

Comedy. If you liked me on TV, then you’ll love me on Under the Covers. It’s all the glamor and fun. But with singing, comedy, costume and wig changes. One thing you don’t get on TV is the full sensory experience. If I get close enough, you’ll smell me. I smell like roses. I actually do smell like roses, because I use Red Roses by Jo Malone.

It doesn’t work nearly that easily!

If I went on Grindr right now, would I see a photo of you in a wig?

No. You would see me – a very clear, unmistakable headshot. And in my profile, I do say I do drag. I don’t say ‘CBB winner Courtney Act’. But being really upfront about my identity can only lead to a more authentic experience. If someone’s going to be put off by me doing drag, I ain’t got time for that. I’m a busy woman!

Silence of the Lambs. Katya tried to get me to watch it. She started watching it with me but we only made it through the first 10 minutes before getting distracted!

At about the age of nine my party trick was pulling my penis and my testicles between my legs and saying ‘Look, I’m a girl!’ And I’ve turned it into a career!

[Jokingly] Andrew Brady! No. I need a new one. But who?

Well, you once said you want to be Justin Bieber’s butt plug…

Wow… I’ve gone off Justin. He’s a bit too churchy, isn’t he?

Which RuPaul’s Drag Race queen do you fancy?

I did say I don’t do dairy, but for Milk I’d make an exception.

Do drag queens hook up a lot?

I don’t think they do. Adore and I have made out, but that’s neither here nor there. What’s some saliva between road dogs?

I saw your tweet about Ann Widdecombe from February. Could you elaborate on it?

It’s funny when people, fans, after seeing the way I conversed with Ann on CBB, and the way I’ve spoken about her on social media, then, in my name, go and slag her off and call her horrible names. The message that I embodied was the antithesis of that.

I understand people act that way because they’re hurt, or because it’s the internet and it gives them a sense of identity. A lot of internet trolling comes from people feeling powerless. It bolsters their own self-image. I get that. But I hope before making a horrible comment about somebody, think about what’s going to help you, help them, and the conversation you’re trying to participate in. Slagging off Ann isn’t going to help.

What do you think of the drama between The Vixen, Aquaria and Eureka O’Hara on RPDR S10?

It’s interesting. From the first episode of Untucked I’ve loved Asia, Monique, Monet and The Vixen. In a world of ‘Yas mama, werk, hunty’ – all of those dull as dishwater, overused, Drag Race words… It’s just so tiresome. I get Drag Race creates this great two dimensional characters with catchphrases, but… Even on the Drag Race Instagram when the girls were at the premiere and were like ‘I’m serving something-something realness, yas hunty’ – I was like, for fuck’s sake.

But then I saw Asia, Monique, Monet and The Vixen owning what is essentially queer black language. They’re not people who have watched the show and picked up catchphrases. They are the vernacular. I remember Monique: ‘Girl, this is Untucked! Let your dick out and talk!’ Yes! I live for that.

I really enjoyed, initially, The Vixen calling out Aquaria. She is an instigator. But you know what? I found it really refreshing. Especially earlier on. There’s something about when Aquaria was like, when someone will sit there and dish and bitch about somebody, and then when they’re face-to-face be like ‘Oh…’ And I know we say things in private that we wouldn’t say to a person’s face, but you’ve got to have a backbone at some point. You’ve got to own what you’re saying to some degree.

I actually liked the dialogue that happened. Living in America the last seven years, I do understand that narrative of the ‘angry black woman’, and the fact that if The Vixen is angry and raises her voice, she’s a stereotype of an angry black person, whereas if a white person does that, they’re just someone who’s raising their voice. I think it’s funny.

People are like ‘The Vixen’s really playing into that stereotype and reenforcing it’ – well, I think that’s her point. Black people can’t have emotions because they will be stereotyped and that is a problem. I think some of the audience is getting it and a lot is missing it. 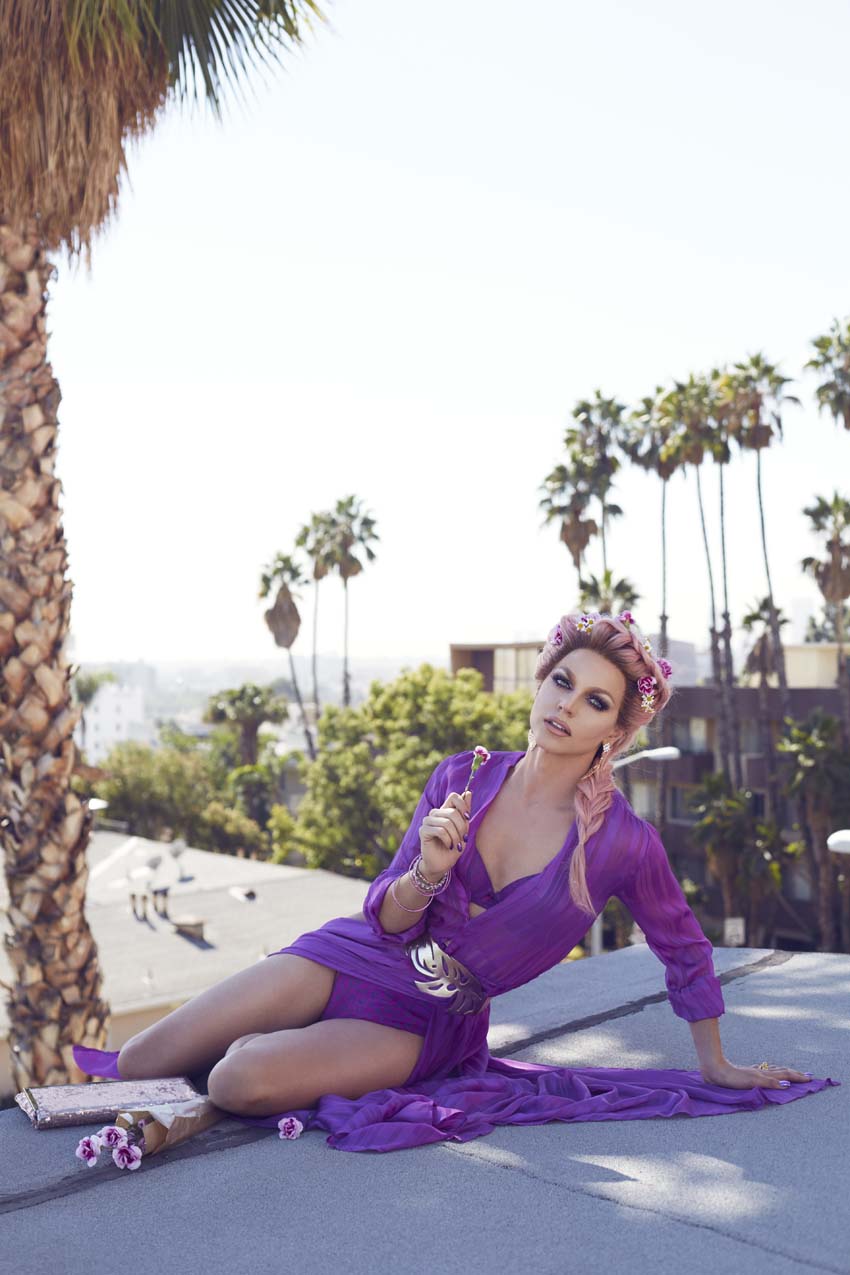 Isn’t it crazy how drag is now a global industry…

Drag is a global industry, there’s no doubt about that. It’s kind of like the popularisation of the hip hop movement back in the 90s. There were all these hip hop, RnB and rap artists who were coming to great public attention.

Rappers and drag queens are quite similar in many ways, when you think about it. They were a lot of bling, they’re very flashy, they have other names… It’s this new, global industry that’s started. Drag queens are touring around the world.

There are so many drag queens in first class now! I was watching Farrah Moan [on social]: ‘Here I am in first class! And who’s going to come and sit next to me but Aja!’ They were flying to the same city! It’s fascinating that there’s all these businessmen in first class and then a whole bunch of eyebrowless, pasty-skinned, glue-residued, fake nail-wearing boys! We don’t usually fly in drag, although I have a few times out of necessity.

Finally, how do you feel about RuPaul’s comments about ‘probably not’ allowing post-transition trans woman on RPDR, now some time has passed?

I understand the show is RuPaul’s Drag Race. He’s entitled to do what he wants with the choice of contestants. He has created this huge international platform. I’m thankful for the opportunities, not just for myself personally or the community, but the world at large.

I think in so many ways the world benefits from the visibility of queer culture. Drag Race has been a very active participant in social change and attitudes towards gender and sexuality.

[But] I think that Ru definitely comes from a different era. I would say that as someone who is 36, who grew up in the 2000s, my experiences with the trans community was all trans women who were drag performers, so I had a very limited experience. That’s actually not representative of the trans identity at large. I had an understanding of the trans community and thought like RuPaul did at one point.

Then I realized trans women and drag have intersected in our community since the beginning. We used to talk about the drag queens at Stonewall in New York, and now we realise that Marsha P. Johnson and Sylvia Rivera were trans women who were also drag performers.

It’s foolish to suggest that the trans identity is mutually exclusive with a the drag identity. I know they’re not at all the same thing, but they do intersect.

More than that, I think Ru’s comments – to set yourself up as a gatekeeper and pass judgement and make comment on a woman’s body at some point in her transition, that because she didn’t have breasts she was somehow acceptable to be on Drag Race, but if she did have breasts then she wasn’t acceptable, it doesn’t make any sense.

And when you look at competitors like Detox, who had a lot of body modification – and she’s not the only one, but she’s probably the most extreme, how is that different?

I understand the thought process behind why Ru said that because I’ve thought that way in the past. But I’ve informed myself, had conversations with trans friends and listened to what they said rather than apply my filter to their experience.

I think that’s the thing that’s missing. You have to listen to someone and believe them. There needs to be a more inclusive attitude. I mean, after 10 seasons as well, mix it up! Add some trans women!