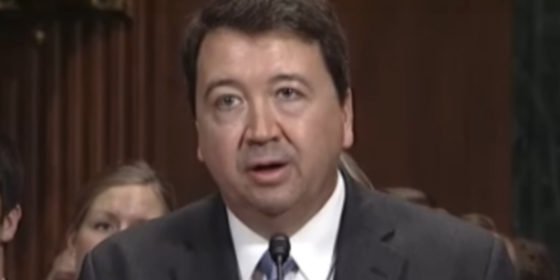 The 52-year-old from Hot Springs, Arkansas, has a history of standing against advancing LGBT rights.

Bush’s nomination to the Sixth Circuit Court of Appeals was made on 8 May and is currently pending. A hearing about his nomination took place on Wednesday, during which Bush was questioned by the Senate committee about some of his previous blog postings.

In a blog post from 2011, Bush ridiculed the State Department efforts to change passport forms to accommodate gay or lesbian parents by saying: ‘It’s just like the government to decide it needs to decide something like which parent is number one or number two. When that happens, both parents are subservient to the nanny state – more precisely, a nanny Secretary of State.

‘This commentary reflects a hostility to the need for all parents to have a more neutral way to identify their relationships on their government’s forms.’

‘An inability to be a truly disinterested and fair judge’

Liberal group People for the American Way has sent a joint letter, signed by 15 organizations, to the Senate Committee about their concerns.

PWFA executive Marge Baker said: ‘[Bush] made comments about LGBTQ people and reproductive choice that suggest an inability to be a truly disinterested and fair judge who would follow precedent over his own beliefs.’

The letter continues: ‘Bush’s views on civil rights issues are fundamentally at odds with the notion that LGBT are entitled to equality, liberty, justice and dignity under the law.’

The Alliance For Justice group, based in Washington DC has released a report into Bush’s background and attitudes towards LGBTI people.

Nominations to the Senate Committee are ongoing.