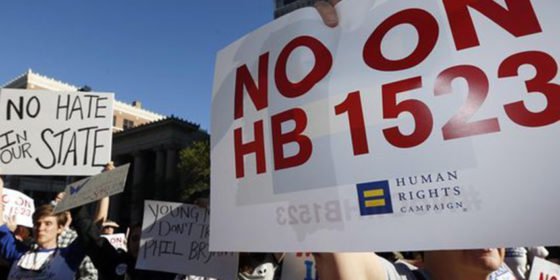 The Fifth Circuit Court of Appeals in Mississippi has cleared the way for the most anti-LGBTI state law in America.

HB 1523, deceptively titled ‘Protecting Freedom of Conscience from Government Discrimination Act’, allows individuals, stores and organizations to use religion as a reason to turn away LGBTI Mississippians at work and at school.

‘We are deeply disappointed that the actions taken today by the Fifth Circuit Court of Appeals clear the path for the anti-LGBTQ law HB 1523 to take effect in Mississippi,’ said Rob Hill, HRC Mississippi state director, in a statement.

‘This law — now the most discriminatory, anti-LGBTQ state law in the country — was rooted in hate, it targets the LGBTQ community and it is a deliberate attempt to undermine marriage equality and the dignity of LGBTQ Mississippians who lawmakers have sworn to serve and protect. We will continue to fight tooth and nail against HB 1523 until it no longer threatens our community.’

‘Marriage is the union of one man and one woman’

The bill explains the following religious beliefs protected are: ‘Marriage is or should be recognized as the union of one man and one woman; Sexual relations are properly reserved to such a marriage; and Male (man) or female (woman) refer to an individual’s immutable biological sex as objectively determined by anatomy and genetics at time of birth.’

It would also give foster families the freedom to force an LGBTI child to take part in ‘conversion therapy’. In addition, it would allow counselors to refuse to carry out state contracted counseling sessions based on their religious beliefs.

Originally the HB 1523 was blocked last year by US District Judge Carlton Reeves, just before its effective date.