LGBTI Mongolians and allies march through the country’s capital, Ulaanbaatar.

Footage and images of LGBTI Mongolians and allies braving pouring rain as they marched through the city went viral.

“This year was so far the biggest Equality Walk both in terms of the crowd as well as the coverage by media and social media engagement,” said Anaraa.

“Partly this was due to the fact that a lot of younger LGBTI people and allies joining and social media exploded with harmful myths that are still alive in Mongolia’s society.”

The United Nations joined the march for the first time as part of its UN Free & Equal Campaign.

Events include a Voices-4-Equality concert, an Arts-4-Rights arts exhibition, and the Beyond the Blue Sky Queer Film Festival.

“The Equality & Pride Days are not yet a celebration of equality,” Anaraa told Gay Star News. “They are a reminder that we are still treated as secondary citizens because of the negative mindsets and attitudes.”

Mongolia decriminalized homosexuality in the late 1980s. Last year, it changed to the country’s Criminal Code to outlaw discrimination and hate crimes on the grounds of sexual orientation and gender identity. But Mongolia society does not yet widely accept LGBTI people.

“Most of the hate comments are coming from lack of education and ignorance,” he said. “Providing information and raising awareness is one of the important thing here in Mongolia.”

“It doesn’t matter if the reaction is negative or positive, starting a dialogue here in Mongolia on this issue is very much needed.” 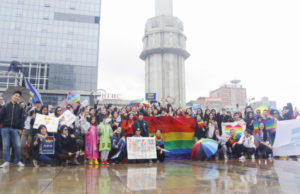 LGBTI Mongolians and allies pose for a photo during a pride march in the country’s capital, Ulaanbaatar.