The couple, who recently announced their engagement, spent the day in the English city and met people living with HIV.

The @THTorguk event on #WorldAidsDay wants to encourage everyone to #SeeRed in solidarity with people with HIV/AIDS and fight the stigmas that surrounds the disease. pic.twitter.com/Qbdfuyjnsg

‘World AIDS Day is an important day to remember all those lost to HIV since the start of the epidemic,’ he said. ‘Thankfully, incredible medical advances are being made in the fight against HIV since our namesake Terry Higgins lost his life 35 years ago.

‘Today the UK is closer than ever to beating HIV, with the largest drop in new diagnoses reported this year. But we won’t get there until we stamp out HIV stigma for good.’

Today Prince Harry and Ms. Markle learn how @THTorguk are working in Nottingham to provide support to people living with HIV and AIDS. pic.twitter.com/FJKUvhkROW

The couple spent the morning meeting fans and members of the public during a walk from the National Justice Museum in High Pavement to the Nottingham Contemporary.

After their visit to the HIV event, they met students at the Nottingham Academy.

The Prince of Wales is a long time supporter of charities helping to fight the spread, transmission, and stigma surrounding HIV.

Last year, he even recorded a Facebook live video getting a rapid HIV test. And just last week, the young prince attended a pop-up shop in support of Terrence Higgins Trust.

On the day, he said: ‘In today’s world, you’re going to be celebrated and included more than ever before.’ 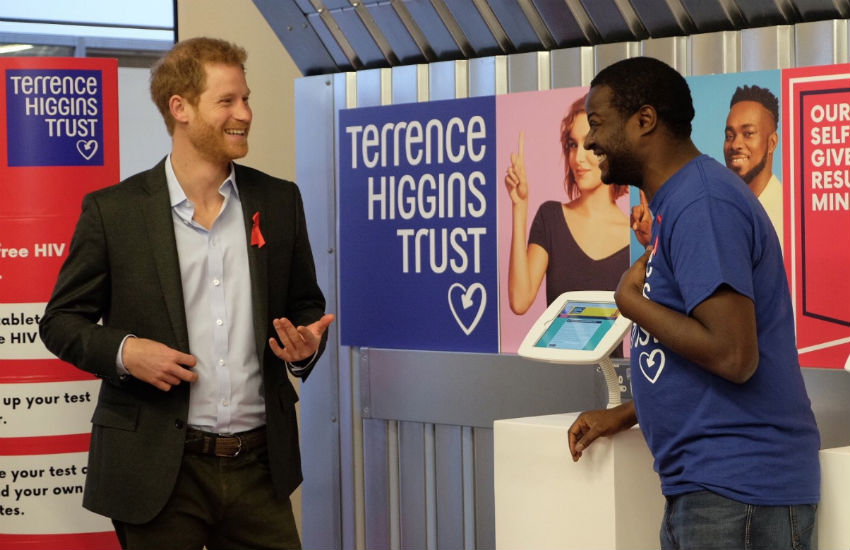 One of the people to meet Prince Harry today was 23-year-old Andrew Bates from Sunderland.

He told Gay Star News: ‘Harry is so lovely and so genuine. He’s such a nice guy, you could talk to him for hours.’

Prince Harry just wanted to have a casual conversation about Andrew’s life, including his coming out story and when he found out he was HIV positive.

‘Hopefully this spurs on more people to get tested,’ Bates said.