Survivors of people who have lived in anti-gay countries have spoken out about the terrors they have faced as LGBTI people.

Raped by police, outcast by family and their lovers killed, many have revealed how they were forced to flee from lives of persecution and discrimination.

Activists, from the 36 Commonwealth countries where homosexuality is banned, are now fighting for freedom.

The video, created by the Peter Tatchell Foundation, is being debuted exclusively on Gay Star News.

Survivors speak out against anti-gay laws

One woman said: ‘I was locked up when it was discovered that I was kissing a lady.’

‘I was raped [by] police.’ She continued: ‘I was forced into marriage…I suffered also domestic violence.’

She added: ‘I was caught with my last partner in a hotel, where she later on died at the police custody after serious beating.

‘So I had to flee for my own life because they were after me as well.’

One man said how his brother tried to kill him, while another said his partner was killed by a mob.

‘I had to run away,’ another one of the survivors said. ‘Because I was lucky I was not killed that day. That’s why I am here.’

‘They manage to find out that we are same sex partners and we were dismissed from work, where we are working,’ another man added.

‘So when we were running away from one area to another with my friend, that’s when he was killed.’

The video was created during a landmark protest calling on Commonwealth leaders to decriminalize homosexuality.

It followed British Prime Minister Theresa May issuing an apology for harmful laws imposed in the colonial era and a call for reform.

UK must ‘stand up’ against homophobic laws in 36 countries 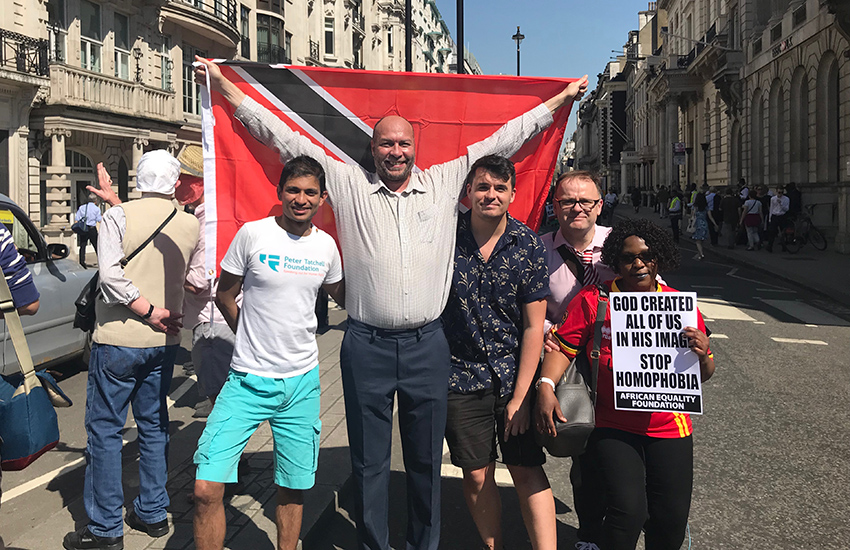 Baroness Liz Barker said the UK has a ‘duty’ to stand up against homophobic laws.

‘We recognize in the UK we are extremely lucky,’ she told GSN.

‘It is our duty to stand up for all those people around the Commonwealth who suffer day in day out because of the horrible colonial legacy we left behind.’

He said: ‘It’s shocking that so many leaders slam the door in the face of so many people fighting for freedom.’

Aderonke Apata is a lesbian Nigerian woman who fled her country to seek asylum in the UK.

‘Going forward, Britain should work with other countries to decriminalize homosexuality so people can be free,’ she said.

‘Britain caused this problem and they need to fix it. Until they rights the wrongs they have done, they have to live with the fact people will come this country for asylum and refuge.’