Being closeted can make you feel like you’re in a war.

Coming out, blinking into the sunlight, you may come out scarred, bruised and just thankful to be alive.

But the wounds run far deeper, and the way people cope with internalized homophobia, shame, and self-hatred are varied and unique.

Absolute Hell, playing at the National Theatre in London, takes literal war wounds and displays them across 20 characters on stage.

War wounds are displayed on the London stage

Set in the hangover of World War 2 in a seedy Soho bar, the setting is a haven for homosexuality and social anxiety.

We watch as some characters drink to forget their problems, others use sex, books, religion – but all show visible signs of trauma from the horrors of what they have faced.

There’s no real plot, per se, as each drinker takes center stage to reveal their problems, politics and to debate the price of duck.

A main character is Hugh Marriner, a gay writer begging for loans from other drinks as he forgets his worrying boyfriend at home.

Written by Rodney Ackland in 1951, and produced by gay playwright Terrence Rattigan, the play was originally deemed a failure.

Critics saw the open homosexuality, and viewed it as a ‘libel on the British people’.

Thirty years later, the play was rewritten and renamed from The Pink Room to Absolute Hell. And even though it was the 80s, Ackland went even further to give gay and bisexual characters visibility on stage.

Hugh had a nagging wife in the original script, so the gender was flipped in the new version.

Homosexuality and bisexuality are a main focus in the production 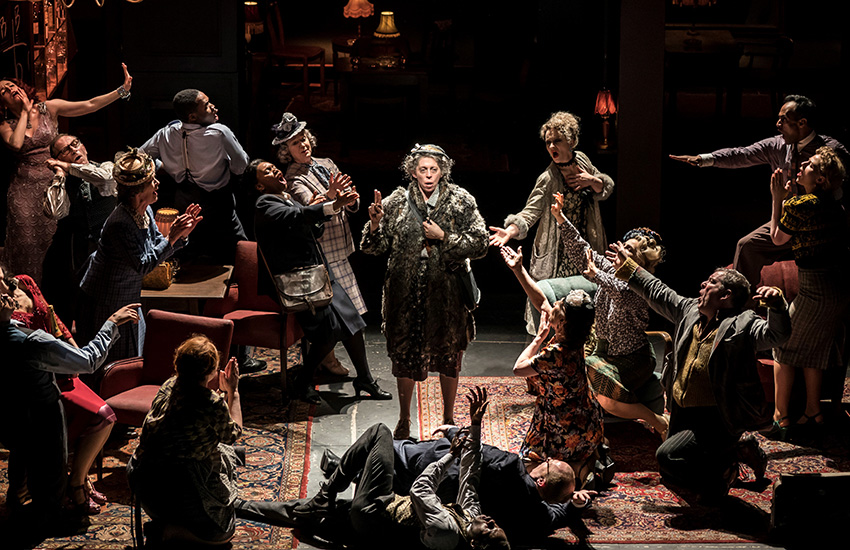 In this 2018 production directed by Joe Hill-Gibbons, homosexuality and bisexuality remains a cornerstone.

The bar is filled with drinkers, and many times silent male characters share a kiss on a sofa. An American soldier first appears to be only into women, but soon reveals he is happy going to bed with a man.

While it appears grumpy theatre critic Mrs Pratt and her caretaker PC Molsom appear to be a lesbian couple, this isn’t quite made as explicit as the gay and bi male characters.

Hugh’s Charles Edwards and Christine’s Kate Fleetwood are easily the stand out performances of a fine ensemble.

Absolute Hell falters by its pacing. There would have been a benefit to a ruthless edit of the script. It’s a 3 hour 30 minute play, and very often feels it.

Thankfully, it’s funnier than you might expect with the older cast members expertly stealing the best lines in the show.

But there is real drama also.

When Hugh’s boyfriend Nigel walks into the bar, and informs his partner he is leaving him for a woman he does not love, Absolute Hell reaches its heights.

The chemistry between the two actors, as Nigel reveals his own way of running away from reality, sizzles on stage. It is perhaps the best gay break-up scene on the London stage I’ve seen in a very long time.

In the wake of World War 2, Soho served as a hot spot for homosexuality, artists, and free living. Censorship struck in the 70s, but this ultimately progressed to the LGBTI rights movement we have today.

Absolute Hell imagines what it would be like to deal with war wounds, the internal ones that stick around for a long time.

And if you’re a LGBTI person, it’s very likely those scars may feel familiar to you. But this isn’t just any old gay drama, this is absolutely one to see.