This Pride flag can stop a bullet

Too many LGBTI people die needlessly. Too many suffer because of hatred, discrimination and bigotry.

One charity has questioned whether it is now time for a shield to defend against the bullets.

Fondation Émergence, based in Canada, have come up with an art piece for International Day Against Homophoba, Biphobia and Transphobia (IDAHOBIT). 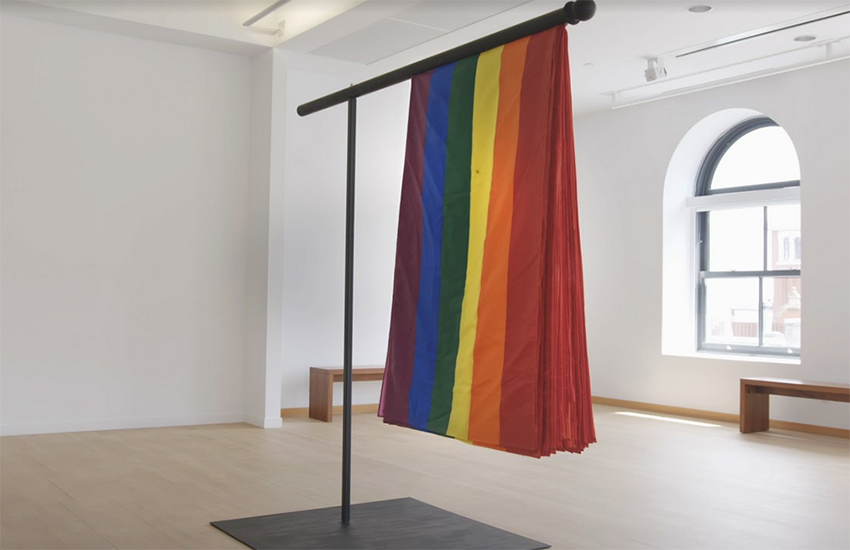 ‘Searching for a new way to tackle the issue, we stumbled upon a lot of Pride parade images and footage, always coming from the same countries,’ a spokesperson told Gay Star News.

‘This made us realize that in some of the biggest countries in the world, most people can’t even show their colors.

‘That’s when we thought of the contraption of a heavy flag. Then we thought that this is a unity issue and then everything fell into place.

‘Laws, prejudices, even violence. Something not everyone thinks about when gauging the LGBT situation.’

The Pride Shield is made up of 193 flags installed on a metal pole. It roughly weighs around 300 pounds.

‘The goal is to have this installation be exposed and move around (hopefully the world?) as a sign of hope that if we stand together, we can help end homophobia and transphobia,’ they added.

‘We have the power to stop any bullet together’

Fondation Émergence’s Francis Viau added in a statement: With 193 flags united in the colors of the rainbow, we have the power to stop any bullet together.

‘As a cry for humanity, these words are also a reminder that the fight against homophobia and transphobia must go on.

‘For years, many activists and allies have worked together to make this progress possible for LGBT people. However there’s still a long way to go and a lot of work to do in terms of inclusivity.

‘This LGBT flag, designed with 193 flags for the International Day Against Homophobia and Transphobia, is a powerful testament that ‘we must all unite and take a stand against this injustice.’