Growing up queer, one of the places that often becomes a safe place — or at least a place to explore your own identity — is fandom. It’s where like-mind people who love the same thing can come together and bond over it.

And, of course, ship fictional characters (as in wanting them to totally get it on).

In Britta Lundin’s new book, Ship It, she explores this cross-road of fandom and identity.

The story follows 16-year-old Claire, who’s obsessed with the TV show Demon Heart. However, when she meets one of the main actors of the show at a convention, Forest, things quickly go south. He laughs off Claire’s assertion that his character is gay and the encounter sends both Claire and Forest on a journey to confront their own sexualities and truths.

GSN spoke to Lundin about representation, her own journey with sexuality, and what fandom really means.

Finding gay characters where there are none

Lundin wanted the book to be relatable to people familiar with fandom (at times it almost hit too close to home for me, in that embarrassing and endearing way).

‘I grew up participating in fandom from an early age,’ she says. Her first experience was with The X-Files in middle school. From there came message boards and fanfiction.

She explains she always watched one show hard: ‘When I started watching a show, it sort of became my identity, my way of relating to the world. And that was how I made it through middle and high school.’

Fandom provided a place for gay characters to thrive — because they certainly didn’t in reality. 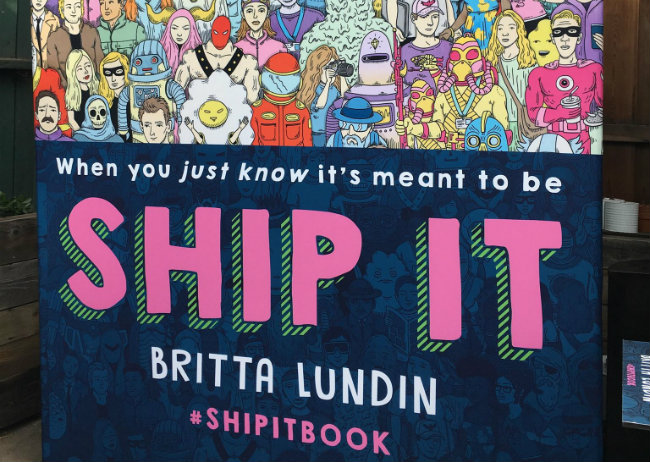 A poster for the book at the launch party | Photo: Provided/Dana Bramble

Lundin grew up in a small town in Oregon. She says back then, Ellen and Will & Grace were the only gay characters she really knew.

‘Characters who weren’t gay in the source material were being treated as gay in fanfic, which meant I could read stories featuring queer characters falling in love over and over again every single night,’ she continues.

‘Fanfiction was basically the only place I could reliably find a wealth of queer storytelling whenever I wanted. And it was free, on the internet, available to all. It was a goldmine.’

The book is told from the alternating perspectives of Claire and Forest.

Lundin grew up in fandom — and currently writes on The CW series Riverdale, which is doing LGBTQ work of its own. It’s these two realities that helped her write the book as she did.

‘I have this perspective where I can understand both Claire, the teenage fanfiction writer, because I used to be her, and Forest, the actor working in the industry, because in many respects, I am him right now.’ 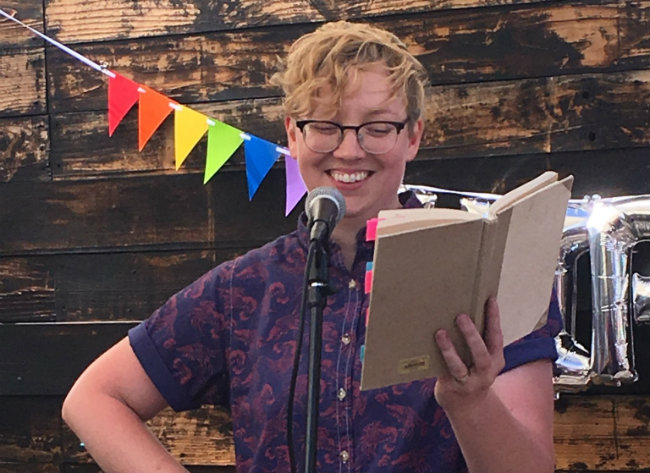 Britta reading from her teenage diary at the party | Photo: Provided/Jessica Dryer

Claire’s purpose is to show that a tough, macho bisexual male character is okay. Meanwhile, Forest acts as something of an audience surrogate, Lundin explains, asking why representation matters and ultimately understanding its importance.

She used her experience with the entertainment industry to her advantage. She talked to people who work in casting and PR and at conventions and beyond. Amusingly, she also used her friends.

‘There are many real world anecdotes that friends have told me that made their way into the story. I hope that all this lends the book a level of authenticity that helps the story.’

Lundin acknowledges that we need more queer stories ‘of all stripes’.

There’s a place for the tragic narratives, because, as she says, ‘it’s still not easy or safe being gay in this country for many people’.

‘But the problem is when those stories are the only ones we see,’ she continues. ‘I think we need a wide variety of kinds of gay stories, not just tragic ones! It feels almost revolutionary in this day and age to depict happy queer people.’ 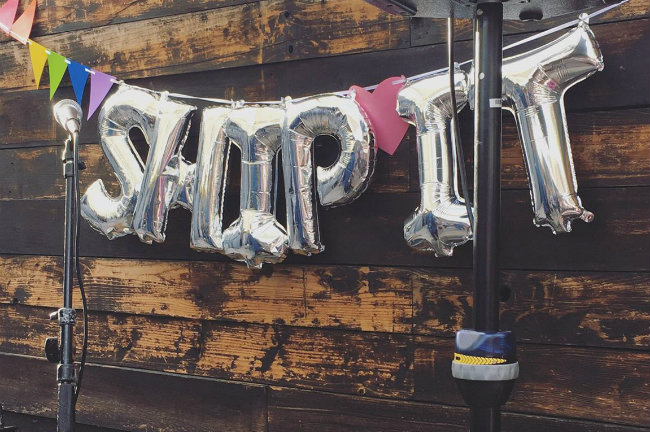 At the Ship It book launch | Photo: Provided/Dana Bramble

And that’s what Ship It provides.

As she says so aptly: ‘When fans are asking for their gay ship to be made canon on the show, what they’re asking for is to see themselves reflected on their screens.

‘It doesn’t mean that creators have to do everything fans want, but a little empathy will help make TV a richer, more representative place.’

A baby step into queer identity

Fandom isn’t without its problems.

There is a phenomenon in the world of straight women shipping male characters where it develops into fetishization — and occasionally misogyny, in erasing the female characters within the narrative.

However, for Lundin — and Claire — it’s different identifying as queer themselves.

Lundin says shipping two male characters was a way to ‘explore queer identity without it feeling too close to home’.

‘For a lot of people, I think shipping slash is a baby step into queer identity.’

However, she also acknowledges the foundational pitfalls in this, in that there are often more (and more interesting) male characters readily available than female characters.

‘Or maybe this is the internalized misogyny that lives within us all that we all have to fight against,’ she concludes. 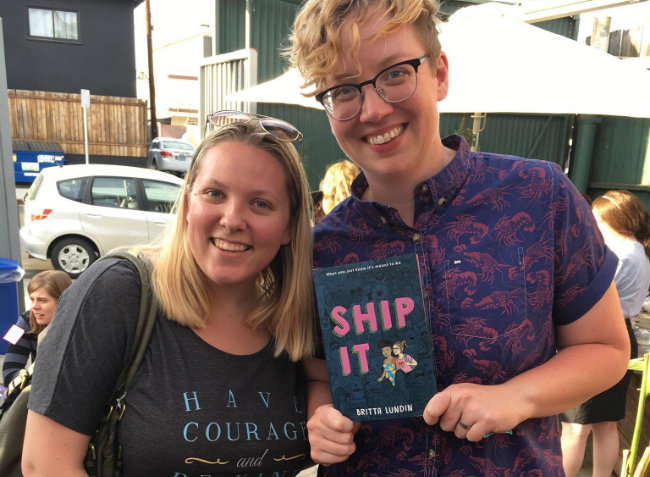 I met Britta at the launch party for Ship It | Photo: Provided/Dana Bramble

As for Claire’s journey, Lundin, who identifies as a lesbian, compares it to her own.

‘I know I had a hard time figuring out for myself, am I a lesbian, am I bisexual, what?’ she once asked herself.

‘One of the things I’d want to tell Claire if I could is that it doesn’t matter if she doesn’t know right away. It’s okay not to know and it’s okay to change your mind. It can take some time to figure it out.’

Ship It is out now.