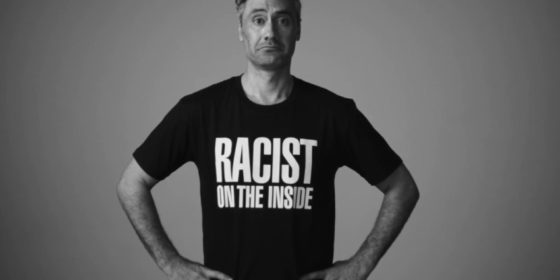 Using the typical dry New Zealand humor, actor, director and producer Taika Waititi has called on his fellow Kiwis to be more racist.

The New Zealand Human Rights Commission made the tongue in cheek ad as part of its Give Nothing campaign to stop casual racism.

Waititi – who directed What We Do In the Shadows, Hunt for the Wilderpeople, Boy and the upcoming Thor: Rangnarok – was one of many New Zealand celebrities to get involved.

‘As New Zealander of the Year, I’m calling on every one of my fellow Kiwis to help support a very important cause,’ Waititi said in the video.

‘Racism needs your help to survive’.

The director then goes on to answer a series of ‘FARQS’ – frequently asked questions about racism – including: ‘my mum says being racist is bad’.

‘Shut up mum!’ was Waititi’s response.

‘You don’t have to be a full-on racist, just being a tiny bit racist is enough,’ he advised.

‘A smile, a cheeky little giggle, even a simple nod in agreement – it all adds up and it give others the message that it’s okay.’

The campaign was created after an increase in complaints about racist incidents to the NZ Human Rights Commission.

‘Racism is a Kiwi problem,’ the commission said on its website.

‘It isn’t new and it’s growing: 1 in 3 complaints to the Human Rights Commission are about racial discrimination; most people who experience racism don’t complain; and we’re seeing an increase in overt racist attacks.’

‘I’m seeing and hearing every day from people in the community that are talking about the racial attacks on them,’ she told Radio NZ.

‘Women who are visually diverse in New Zealand, who wear a hijab, talk all the time about being racially abused at bus stops and schools and in their communities. And what is sad about that is nobody comes to their defence.

‘Fourth-generation New Zealanders are still telling me that they’re the butt of racist jokes or being told to go home,” she said. “I believe that things are getting worse and the reality is most people don’t complain about this.’