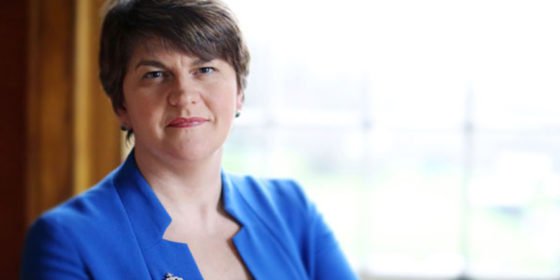 The Conservative party have officially signed a deal with the DUP in the UK.

A ‘confident and supply’ deal was signed by the two parties.

Theresa May called a snap election on 8 June with the aim of earning a larger Conservative majority government. After May lost her majority, she sought the support of the DUP’s 10 MP’s and have now come to an agreement.

In the Queen’s Speech, the UK government vowed to protect on sexual orientation. Notably, they did not mention gender identity.

Speaking live in Downing Street for the BBC, DUP leader Arlene Foster said the parties ‘will deliver a stable government in the United Kingdom’s interest, strengthening and enhancing our precious Union’.

The DUP have a reputation for being homophobic.

Earlier this year, the party said they’d rather block the formation of a government than let same-sex marriage be legalised in Northern Ireland.

Foster also said her party will continue to block same-same marriage in Northern Ireland for ‘at least another five years’.

‘Some of the abuse that is directed at me and colleagues online is very, very vicious,’ she said.

‘And I think if activists want to have a conversation about where they are coming from, do they seriously think they are going to influence me by sending me abuse?’

Despite a petition with 753,244  signatures asking May to not sign a deal with the DUP, she went ahead with it anyway.

According the the Press Association, May said to the DUP: ‘As we set out at the beginning of the talks, we share many values in terms of wanting to see prosperity across the UK, the value of the union, the important bond between the different parts of the United Kingdom.’

UK’s leading LGBTI charity Stonewall have previously condemned a coalition between the parties, explaining: ‘The Conservatives – at the very least – have an opportunity and an obligation to demonstrate to their partners in the DUP why they too need to think again about LGBT people, our rights and our needs, and start actively working to achieve equality for LGBT people in Northern Ireland,

‘It’s vital that the Conservative Party stand firm on LGBT equality, and the Prime Minister makes that clear from the outset’, wrote Chief executive Ruth Hunt.