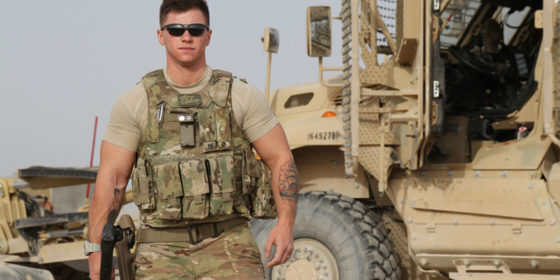 Transgender people, both serving members of the armed forces and veterans, have responded to Trump banning them from serving in ‘any capacity’.

He has blamed the ‘medical costs and disruption’ they would cause to the armed forces.

‘Our military must be focused on decisive and overwhelming victory and cannot be burdened with the tremendous medical costs and disruption that transgender in the military would entail.’

The US Military is the largest employer of trans individuals in the country.

Chelsea Manning called out Trump’s cowardice, while Kristen Beck – first Navy Seal to come out as trans – challenged the US president to meet her.

@realDonaldTrump YOU just opened a can of WHOOP-ASS!!!!#NavySEAL #pipehitter #transgender

MEET ME & tell me I’m not WORTHY to my face. pic.twitter.com/eqAHTysfma

‘I would like to see them try to kick me out of my military,’ Staff Sgt. Logan Ireland, an airman, told Air Force Times. ‘You are not going to deny me my right to serve my country when I am fully qualified and able and willing to give my life.’

The star of the documentary Transgender, At War and in Love, alongside his trans wife Cpl. Laila Villanueva, he said the policy change was a surprise.

‘For the president to deny an able-bodied, fully qualified person the inherent right to raise their right hand and serve their country, potentially giving their own life for our freedoms, is doing this country an injustice,’ Ireland said.

I served 8 years in the Marine Corps and Navy on three combat tours. Just Cause, Desert Storm, Desert Shield. I am Transgender and proud.

I am a transgender veteran who has served honorably. He claimed bone spurs to avoid having to serve in the military. He is a disgrace.

Trump can suck the Iraqi sand off my transgender veteran cock.

Petulant man-child @realDonaldTrump has no clue what it means to support and defend our Constitution. #transgenderVeteran pic.twitter.com/2ITVGLK79G