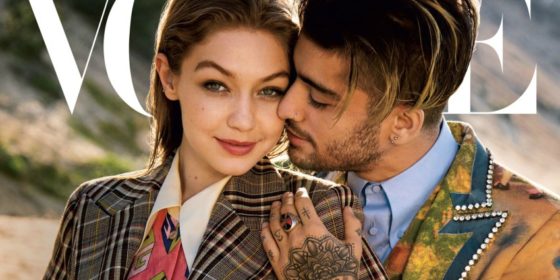 Celebrity couple model, Gigi Hadid and singer, Zayn Malik are the cover stars of this month’s US Vogue and people are not happy.

The couple are touted as champions of their ‘generation embracing gender fluidity’.

Gender fluidity refers to people who do not identify as a woman or a man, or both or none.

Some people may identify as agender (having no gender), bigender (both a woman and a man) or non-binary (neither woman nor man). There is a diverse range of non-binary gender identities such as genderqueer, gender neutral, genderfluid and third gendered.

Vogue seemed to miss that memo and suggested because the couple change clothes, that makes the two gender fluid. Despite the fact that neither Hadid or Malik identify as gender fluid.

Here’s an excerpt of the article discussing gender:

For these millennials, at least, descriptives like boy or girl rank pretty low on the list of important qualities—and the way they dress reflects that.

‘I shop in your closet all the time, don’t I?’ Hadid, 22, flicks a lock of dyed-green hair out of her boyfriend’s eyes as she poses the question.

Hadid goes on to say it’s not about gender, but shapes and how clothes make you feel.

A lot of people said swapping clothes with your boyfriend does not make you gender queer. 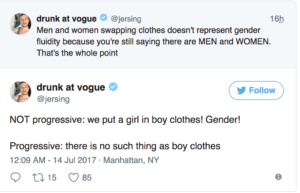 One positive thing from all of this

Some people are celebrating the fact that Malik is a Muslim immigrant and is the first South Asian to appear on the US Vogue cover. His family emigrated from Pakistan to England.

Hadid is half-Palestinian and many are arguing Vogues was a bold to put them on the cover.

‘In this political climate US Vogue put a Muslim immigrant and a half-Palestinian on its cover. that’s important,’ one person tweeted.