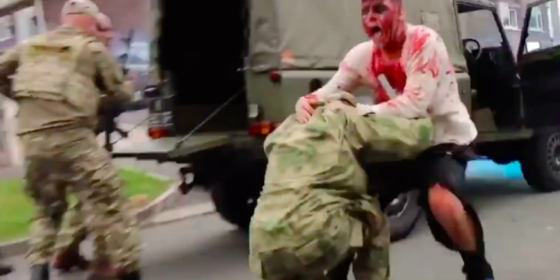 A YouTube prankster got his own back on a homophobic viewer by pranking him with a zombie invasion.

Ben Phillips, who has 2.8 million subscribers, is famous for many videos where he pranks his brother. This time, however, his target was different.

A troll on Twitter wrote to Ben saying: ‘You and your retarded brother needs to get a life, you bunch of faggots!!’

So Ben decided to get his own back.

The prank was staged with the help of the troll’s girlfriend.

In the video, we watch as the hater has to go through a staged ‘check point’ to get back home. That’s when the zombies come in.

Secret cameras capture the troll freak out as the zombies begin to attack and then he runs outside.

While running down the road, away from the zombies, a van pulls up in front of the petrified guy.

On the side of the van is the homophobic tweet, along with the message ‘Sorry bro’.

Ben then gets out the van and lectures the troll on why he shouldn’t make derogatory comments.

Watch the hilarious prank video below.