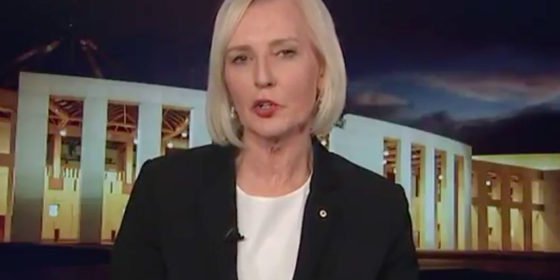 A transgender journalist in Australia has given a moving speech in response to the Margaret Court controversy.

Cate McGregor is a famous cricket commentator and writer, and a serving member of the Australian Defense Force. She is also a keen cricket player.

And as a trans woman, she also has a very strong opinion on the debate around tennis legend turned Christian pastor Margaret Court.

Last week, Court made headlines when she announced she would be boycotting Australian airline Qantas for its out, gay CEO’s support of same-sex marriage.

On Monday (29 May), in an interview for a Christian radio show, Court linked trans kids to Hitler and the devil.

But she started off by saying ‘airbrushing’ Court out of Australia’s history would be wrong, before urging the LGBTI community to not stoop down onto the same level.

‘I think it is a strategic mistake for the LGBTI community to pile on to her given her views, as repugnant as I find them, are clearly in accordance with the teachings of her faith,’ McGregor said.

‘And they are bona fide held. I think she has absolutely overstepped any support from theology or religion in some of her discoursive remarks about the families of transgendered kids, which were just nonsense.’

McGregor also spoke about her experience with parents of trans kids.

‘Those parents only want one thing… they want to things. They want their children to be happy,’ she said.

‘And primarily they want them to not kill themselves.’

She also said she was ‘almost delighted’ with Courts Nazi comparison, as usually ‘the first person to liken anyone to a Nazi generally loses an argument’.

McGregor also took a swipe at religion, despite describing herself as a believer.

‘I would have thought talking about the LGBTI community in respect of grooming children for sex is pretty poor taste coming from a Christian clergy woman in the current climate,’ McGregor said.

But she also said it was important to recognize Court’s right to free speech.

‘I add weight to that because the pile-on last week strategically helped her,’ McGregor said.

’It gave prominence to her views and it rendered her a victim.’

Pointing out how trans people make up about two percent of the general population – if even – the journalist spoke about the challenges trans people face.

‘We face enormous ridicule, discrimination. No one wants to be transgender, we don’t chose it, we’re born like it,’ she said.

‘If that’s the work of the devil, then by their work shall ye know them. I went to bed last night not having made the life of any other Australian miserable – to the extent at least that I am aware of.

‘This woman has to look at her conscience and live with her remarks and ask herself as a Christian when she examines her conscience, has she dealt with us lovingly?’

‘We are all sinners, according to the teachings of both the Old and the New Testament. We are all broken in our humanity,’ she said.

‘Everyone of us grapples to live an authentic, decent life.

‘I happen to be a believer. To think I arrived at my life decision without a process of agonizing discernment is an offensive and gratuitously offensive thing to say to me, when she has no experience of my life and my parental background.

‘I respect this woman for her achievements. I oppose efforts to boycott the Australian Open or to rename that arena because it smacks of Stalinist airbrushing of someone’s history.

‘It is wrong. I would ask her to think heavily and examine her conscience about the impact these remarks have on a very small minority of Australians whose lives are difficult enough without this kind of stuff.’