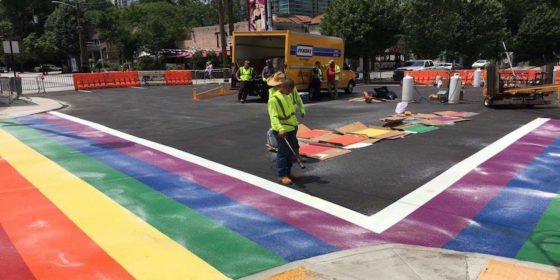 On the one-year anniversary of the Pulse Nightclub shooting, Atlanta’s mayor announced that rainbow crosswalks will be a permanent fixture in the area of the city known for its LGBTI community.

‘To be clear, the crosswalk is actually made up of thermoplastic tiles, not paint. And while they did cost $196,000 to install, that cost actually makes up 0.3 of 1 percent of the city’s transportation budget. Plus, they’re expected to last for 10 years before any heavy maintenance is required,’ 11Alive stated.

The news channel asked Atlanta residents in person as well as via an online poll about their feelings on this money being used for rainbow crosswalks.

‘This is stuff that could be spent on educating young people instead of making the city look pretty,’ one respondent said, wishing the money could have gone to Atlanta’s public schools.

‘I support it. I think they’re beautiful and they’re a work of art,’ another said.

‘I think it’s very important to spend the money in this community. It shows pride. This is what it’s all about. It’s where it started and it’s money well spent,’ a third respondent answered.

As of Wednesday 12 July, 77% of the respondents to the news channel’s Facebook poll voted ‘no’ to the question ‘were the rainbow crosswalks worth the money?’

By Friday 14 July, the responses changed slightly, with 67% now saying ‘no.’