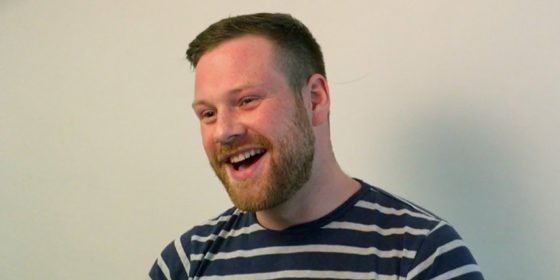 Tourette’s syndrome is often seen as the ‘swearing’ disease, or something hilarious, when the reality is actually very different.

Damian Friel, a 26-year-old student and mental health nurse from Derry in Northern Ireland, has opened up about what it is like to be a gay guy with Tourette’s syndrome, ADHD, anxiety and depression.

Having starred on Channel 4’s First Dates, a show which pairs people up on a blind date, he spoke with Gay Star News about what it’s like to date with Tourette’s last week.

While he may tic talking about his disorder on camera, Friel reveals he can suppress it when he’s working in a bar.

‘[My manager] makes a lot of allowances with me for my Tourette’s. He took a big chance on me working in a face to face job,’ he says.

‘I’m lucky I can suppress my tics when I’m working.  A lot of people have said they don’t recognize I have Tourette’s because I can suppress it so easily.’

Friel’s Tourette’s can also cause him physical pain.

He says: ‘I crack my neck a lot, and get tension on my shoulders. I used to have bad tics when I used to hit myself on the forehead.

‘I used to get really embarrassed by the socially inappropriate comments that I would make or I would tic. But it’s out of my control.’

A chronic condition that normally starts around five or seven and gets worse in puberty, Friel is unusual is that his only showed itself clearly in adulthood.

What’s the best way to treat someone with Tourette’s?

‘Whenever I’m feeling upset by my Tourette’s, I’m quite vulnerable. If someone makes comments, or makes jokes, obviously I’m not in a bad place. I get quite upset, and I can snap at people. It’s not like me the majority of the time,’ Friel says.

‘Normally I’m the first that has a laugh or makes some kind of comment on what I’ve done. The best way is to ignore it, but also go on their cues.’

He added: ‘[My friends] know that if I’m laughing about it, they can laugh along with me.’

Come back next week to Gay Star Support for our last video with Friel. You can hear more from Damian on the MenTalk Health podcast.