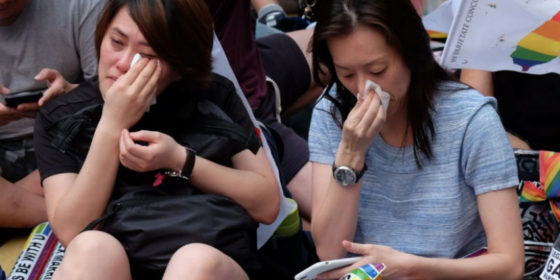 It has been two months since the historic court decision which paved the way for same-sex marriage in Taiwan. But the government has not yet acted to change the law.

In May the Constitutional Court ruled Taiwan’s Constitution was discriminatory against same-sex couples. It currently reads that marriage is between a man and a woman.

The court gave Taiwanese lawmakers two years to amend legislation, but many expected it would happen sooner.

Wayne Lin is a leading marriage equality advocate in Taiwan. He is also a board member of the Taiwan Tongzhi (LGBT) Hotline Association.

But that doesn’t mean the country’s LGBTI advocates are laying low. They’re on a PR campaign to promote LGBTI issues in Taiwan.

They’re also working against communities who refuse to accept the ruling that would make marriage equality a reality.

‘They do not accept the result from the Constitutional Court and they want a referendum,’ Lin said

‘Some of them are trying to get a petition to have a referendum. To me, that’s kind of weird because under our democratic system, the ruling from our Constitutional Court has a binding affect to everyone.’

Taiwan’s LGBTI community is also battling a campaign from anti-LGBTI advocates to have LGBTI content removed from school curriculum.

‘They now have shifted focus… and are asking for all LGBTI content in our gender equity education from our curriculum to be removed,’ Lin said.

‘That actually worries me more (than a push for a referendum) because education is so important.

‘The opposition doesn’t give up, they just try to find a different way to influence society.’

‘Knowing that our Executive Yen is now trying to review all the articles on same-sex marriage, I feel like that’s something that you should have done right before, because this is not a topic that just happened last year, it’s been spoken about for some time’ he said.

‘Regarding the whole process I’m hoping we can maybe get this done by the end of the year, that’s my target.’