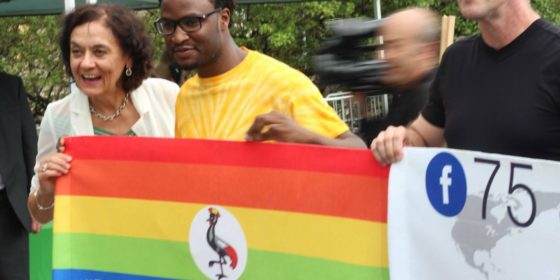 When you want to catch a movie with your friends, you look up the session times, meet at the cinema, buy your snacks, then head in and enjoy the film.

It’s easy to forget that it’s a privilege to watch a film without fearing for your life.

But for some people, cinema is a risky act of defiance. It’s an illegal political statement that could likely lead to arrest or even, death.

To see a film at Uganda’s first queer film festival, people were told where the secret screening location was via SMS.

Kamoga Hassan is the festival director of the Queer Kampala International Film Festival (QKIFF). He explained the extraordinary lengths people went through to see the festival’s films.

‘For our communication we didn’t actually use Ugandan numbers, we had Canadian numbers and people would send us messages on WhatsApp to say they were interested in coming to the festival,’ Hassan told Gay Star News.

‘This allowed us to screen them, we could ask some basic questions about why they wanted to attend the event, so from the answers we could get we could tell who was homophobic and someone who was willing to come.’

‘There was a lot of fear that the police could actually come and attack our event, but then to our surprise people came.’

Uganda has been ranked as one of the world’s most dangerous countries for LGBTI people. In 2014, Uganda passed ‘Kill the Gays’ Bill which after international pressure reduced the punishment for homosexuality to life in prison.

The law was later repealed entirely. But even though there is no specific law banning homosexuality and being trans, LGBTI people still face persecution.

‘We have friends who have been arrested, simply because of who they are. The situation on the ground is not ok for a gay man in Uganda,’ Hassan said.

In 2016, the country’s annual pride parade after police raided a pride fashion show the night before.

Despite the fear of violence or arrest, the inaugural QKIFF exceeded all expectations for audience attendance.

Organizers expected about 300 people to turn up to the 3-day festival, but 836 cinema lovers came along.

‘It was really a huge success,’ Hassan said.

‘We also got people who were outside of our queer family. Most of the people who came to the festival wants to know what it means to be queer and they wanted to learn about our live.’

‘And to people who are part of our family, the films we screened were about them. So it was a way of passing on a message, because they wanted to show people out there, to say ‘hey, we exist’.’

Hassan started the QKIFF not only for Uganda’s LGBTI community to see themselves represented in film, but to raise awareness of LGBTI issues with the wider population.

Even though the first QKIFF was a surprising success, the same security measure will be necessary to protect people.

‘At the moment we can’t go public, we’ll still hold it as a secret event because the police and the authorities are still very hostile when it comes to LGBTI gatherings in Uganda,’ Hassan said.

This time for Africa

Hassan himself is very public in his advocacy work and as QKIFF festival director. His face is splashed across international media stories and the QKIFF social media pages.

Is he ever worried for his personal safety?

‘I must say that I consider myself as an ordinary person who is just doing the right thing,’ Hassan said.

‘Even if I don’t fight, I’m not going to be safe in my own country.

‘I can’t just go silent when these injustices happen.’

The QKIFF director knows his work will benefit future generations of LGBTI Ugandans.

But he also has his sights on helping his fellow Africans.

This year they want to bring queer filmmakers to Uganda from African countries where it is illegal to be queer. They will also run workshops to help train LGBTI African filmmakers to be able to share their stories.

‘Part of our goal is to listen to other people who are coming from similar situations and we can hopefully find a global solution to what is affecting our queer family,’ Hassan said.

‘We have very few Africans who are telling their own stories, through their own images.’

It costs how much to run a festival?

Paying for African filmmakers to come to Uganda will be an expensive task, as is running a film festival.

QKIFF relies solely on donations from the public because local companies are afraid to sponsor the event.

‘We don’t charge money for people to be a part of our events, we absolutely charge nothing. But we pay for venues where we can have these film screenings and we pay for the technical hire,’ Hassan said.

‘We rely on people’s generosity and mainly people from outside Uganda. Whether it’s $5 or $10, every little bit helps.’

QKIFF has set up a fundraising campaign to ensure this year’s festival will not only be able to go ahead, but to showcase LGBTI talent from across Africa.

The team are looking to raise $35,000 and if you would like to donate some money,  you can do so here.

Hassan said even if people can’t afford to donate some money, he wants them to get behind QKIFF by sharing its social media pages.

‘It’s important for people in more privileged countries to support people who are on the ground,’ he said