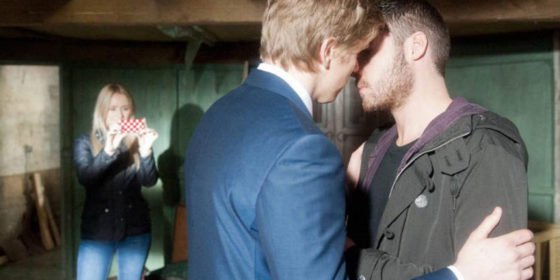 The writers of British soap, Emmerdale, apologized for harmful bisexual representation on the show.

Robert Sugden is bisexual on the show and is dating gay Aaron Dingle, who was sent to prison earlier this year.

Then, last week, Sugden cheats on Dingle with a woman.

Many fans of the show condemned it for perpetuating the stereotype that bisexual people can’t stay faithful.

Producer of the show, Iain MacLeod, said: ‘We took the view with the character of Robert that his sexuality was low on the list of things that were most interesting about him. He’s devious, manipulative and self-serving and has been since birth.

‘But he recently cheated on his partner and we’ve got a very angry backlash from certain portions of our audience. They feel that we’ve pandered to this incorrect perception that bisexual people are somehow promiscuous or untrustworthy.

‘It’s just a really good example of us as an editorial team forgetting people’s sexuality and having this attitude of, “We can tell any story we like about anyone.”

‘But actually this has been an interesting exercise in checks and balances.

‘It’s forced us to reassess how do we deal with characters. Should we consider their sexuality more prominently when telling stories?

‘It’s been interesting for us.

‘I still feel like you should reserve the right to have a bisexual character do something scurrilous if that’s consistent with their character and if it’s truthful, but certain portions of our audience haven’t agreed.

‘Sometimes you can overlook the sensitivity around certain areas,’ he said.

Fans of the British soap took to Twitter to criticize the producers. Charlie said: ‘As a bisexual I can say he has insulted & disgusted the Emmerdale audience!’

MacLeod attended a Pride in London event last week, but fans condemned his attendance after the controversial episode.

Molly Leyshon tweeted: ‘A man that fulfilled every bisexual stereotype and messed up his show’s only LGBTQ couple… goes to a pride event.’

While another tweeted: ‘Shocking to let him anywhere near a Pride event when he reinforces negative bisexual stereotypes.’