Considering a trip to South America? Although Rio De Janeiro’s famed carnival brings thousands to Brazil, it’s the capital of Argentina, Buenos Aires, that takes the honor of being the most visited city in South America.

The new route appears to have proved an instant hit. I took advantage of the Premium Economy section of its 787 Dreamliner. The flight duration is 14 hours, so I did appreciate the generous legroom and opportunity to recline and grab some sleep.

A couple of important recommendations when planning your trip. Argentina Pesos are a pretty rare currency in the UK – not available at most British airports or banks. If you like to exchange money in advance, either take US dollars (accepted by taxis), or make sure you change your currency well ahead of your flights.

Secondly, Buenos Aires taxis at the airport have a reputation for ripping off tourists. Book yours in advance for a set price. Reputable firms include Taxi Ezeiza, Transfer Express and Tienda Leon. Taxi Ezeiza charges AR$895 from airport to city – which is around £32 ($44/€36)

With your transport and transfers covered, you can now set about enjoying what Buenos Aires has to offer. 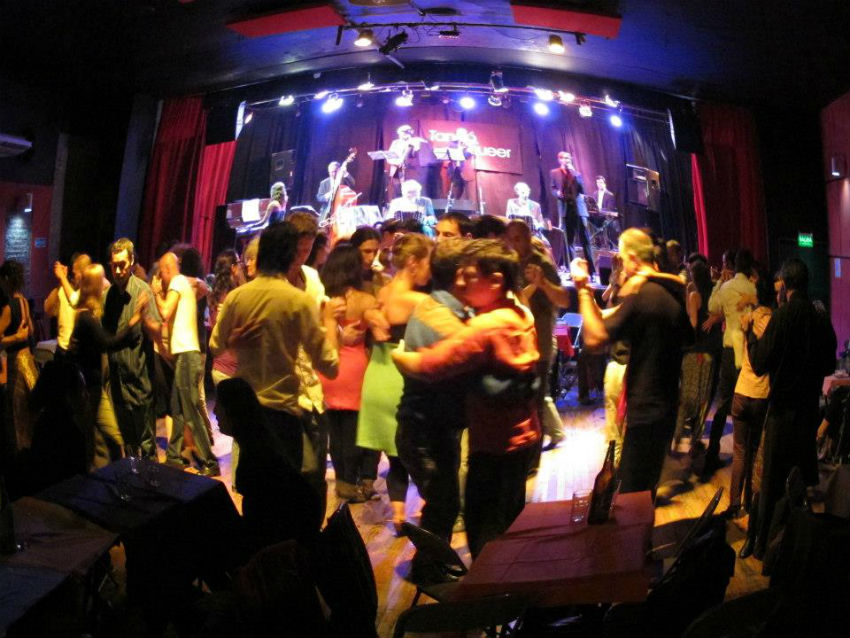 I’d been in Buenos Aires less than 24 hours before I found myself with my hands on the chest of a strange man, learning my first tango steps.

A cliché? Perhaps, but what’s the point of travelling to the other side of the globe without enjoying some of the local culture?

Tango Queer was created in 2005 by Mariana Docampo and some friends. It runs weekly, offering classes and tango dancing on Tuesday evenings in San Telmo. You climb a large staircase to an old, first floor hall, where a small dancefloor sits in the centre of the room.

Mariana gives lessons in Spanish and snatches of English: you mainly learn by following her steps. You swap partners frequently, dancing with both men and women – some of whom were thankfully absolute beginners like myself.

It would probably be more fun to learn with a romantic companion, but my taster session was a beguiling introduction into this local, undeniably sensual art form. Mariana started us off gradually, showing us how to lean in and lead with our chests – indicating planned movements, left or right – to our partner.

The two-hour lesson passed surprisingly quickly. Admission for lessons and the post-lesson dance is just ARG$150 (around US$7.50), so it’s a cheap excursion, too. Despite turning up on my own, this proved to be one of my Buenos Aires highlights. 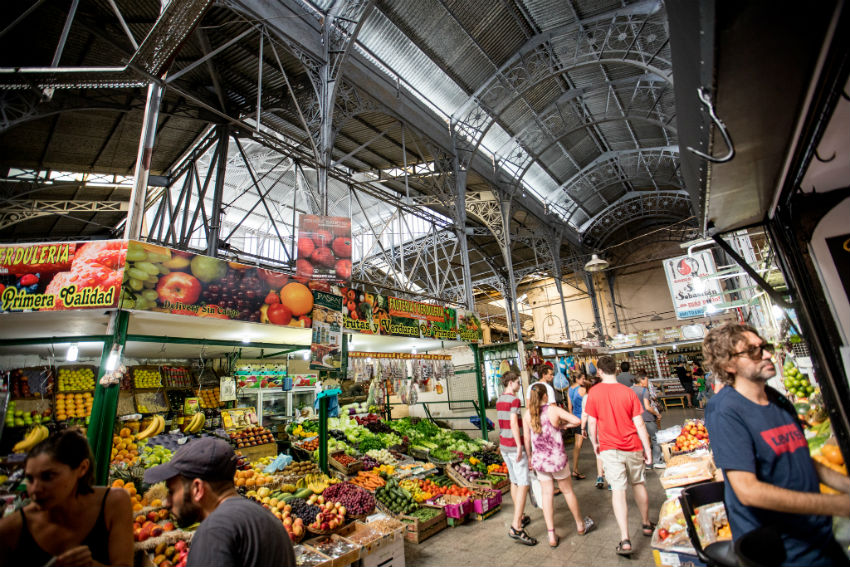 You’ll find butchers, fishmongers, bakers, greengrocers and much more besides in this historic indoor market, which dates back to 1897. The nearby Plaza Dorrego is pretty little square that’s lined with cafes. It often hosts live music at weekends, when it’s at its most enchanting.

The surrounding streets are busy with souvenir shops and little independent boutiques and design ware. The Sunday market is one of the city’s must-visits for tourists.

When you go, do take a small detour to check out Pride Café. This small gay-run cafe is the only LGBTI venue open during the day. Pop in for a breakfast, lunch or dinner snack. 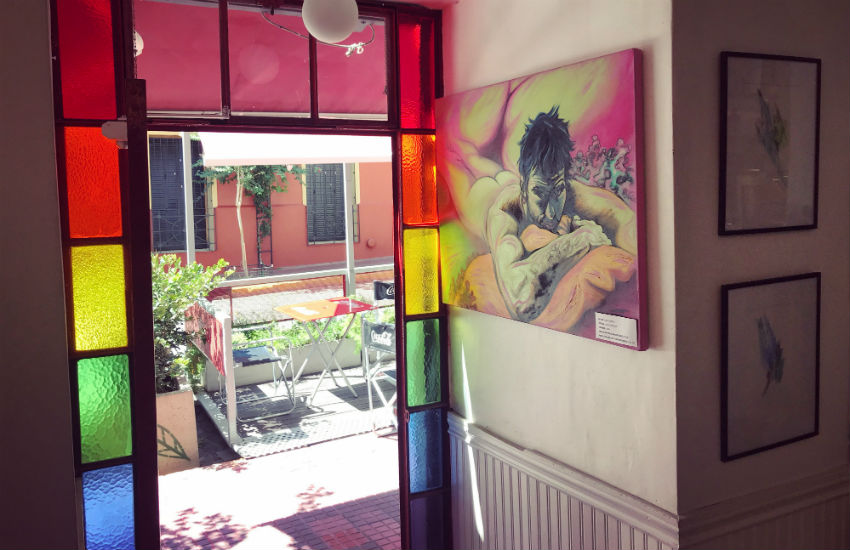 If you want an insider’s expert opinion on all things Argentine, book a place on the Gourmet Buenos Aires Food Adventure tour of Recoleta. It’s the upmarket district neighboring Palermo.

We ended the tour with gelato at Valence – which offers a bewildering eight different varieties of dulce con leche ice cream, including one with goat’s cheese! 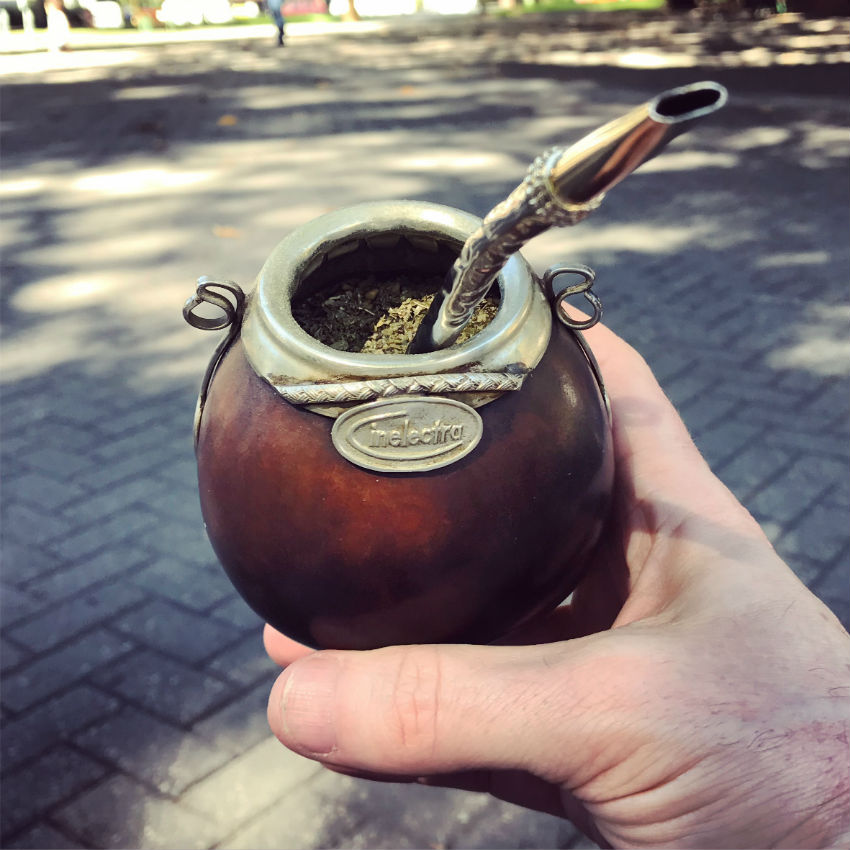 After this, Silvina took me to a local park to introduce me to the delights of mate (pronounced mah-tay): a local herbal infusion that one drinks from a dried out calabash gourd through a special metal mate straw.

The bitter, tea-like drink is shared among friends or co-workers, and its preparation and sharing is something of a social ritual. It’s not generally available in bars or cafes, so a tour such as this is the perfect opportunity to try it.

The three hour Argentinian food experience starts from £86.29 per person and this price includes food, a glass of Malbec and a guide throughout. For more information, visit: urbanadventures.com 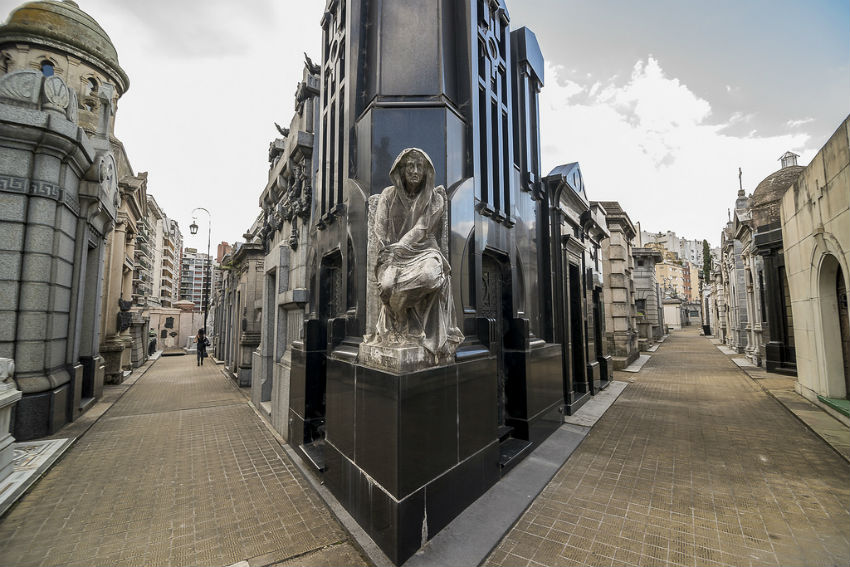 The cemetery in Recoleta is one of Buenos Aires’ most famous landmarks. Unlike any other cemetery I’ve ever visited, this one is packed with the mausouleom of wealthy families. Glass doors allow you to look in and see many of the coffins: perhaps not an excursion to suit all tastes, but fascinating nonetheless. Many of the country’s most famous politicians lay at rest here, including former President Juan Perón, and his wife, Eva Perón. 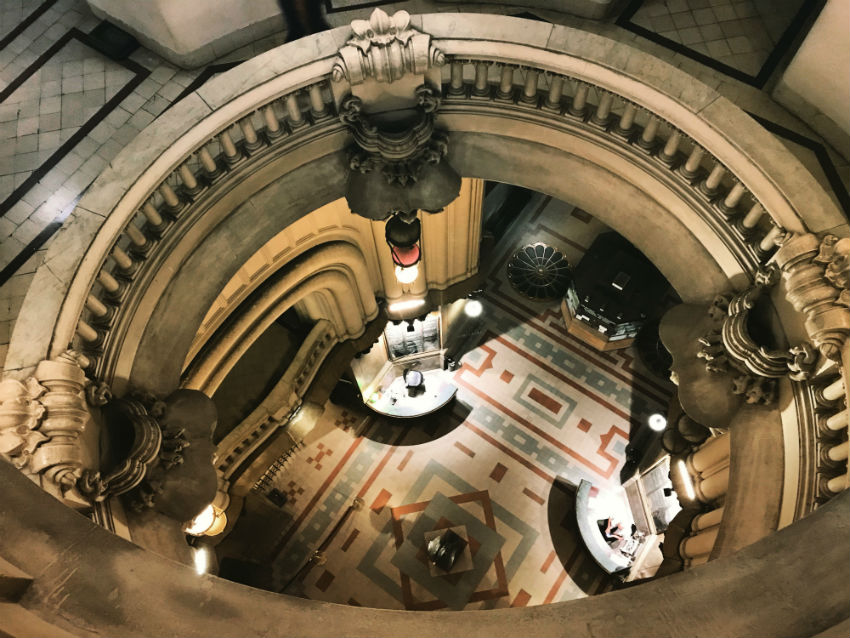 The interior of the Palacio Barolo (Photo: David Hudson)

For an intriguing glimpse of Buenos Aires history, check out Palacio Barolo.

When it was built in 1923 it was the tallest building in South America. Conceived by two Italian businessmen, its interior was inspired by Dante’s Divine Comedy, with floors representing Hell, Purgatory and Paradise.

It’s rich in symbolism and cosmic meaning, including its very address and alignment (which ensures its summit lighthouse lines up with the Southern Cross star constellation on a certain date of the year). DaVinci Code author Dan Brown would have a field day!

I enjoyed the two-hour evening tour, when the building is at its spookiest. 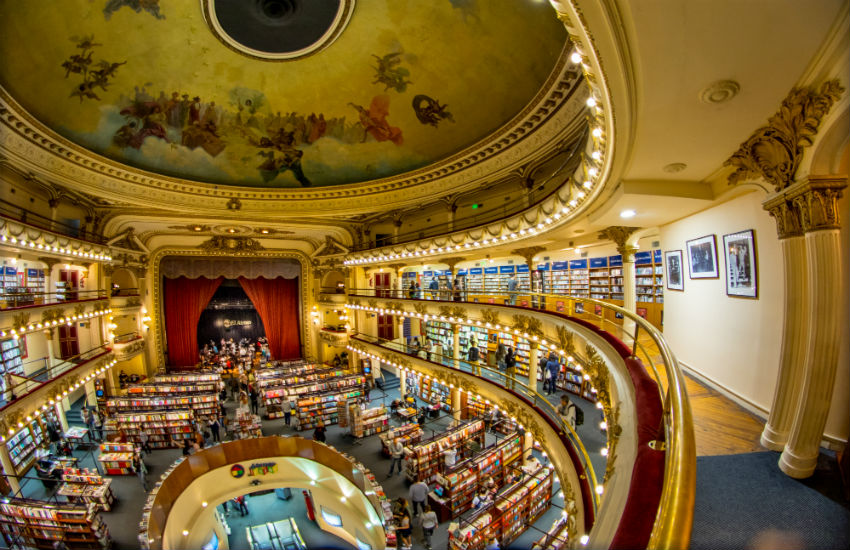 If you’re seeking other classic Buenos Aires experiences, have a coffee at Cafe Tortoni, the oldest grand café in the city, and browse the books at the Librería El Ateneo Grand Splendid (pictured above). The latter is regarded by many as the most beautiful bookshop in the world. 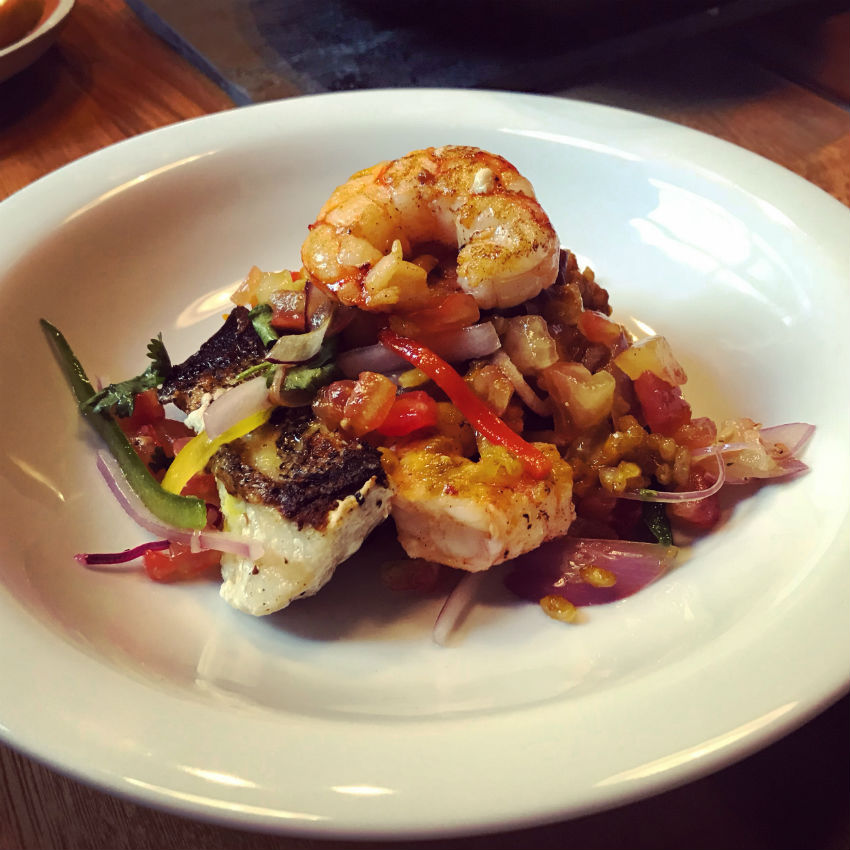 There’s not a huge difference between pricey bad food and amazing good food in Buenos Aires. You can order two slices of pizza, a beer and empanada for US$12 in a cheap but average quality restaurant, or pay just a little bit more to have something truly memorable at one of the city’s finer establishments.

UCO, one of Argentina’s best-loved restaurants, definitely falls into the latter category.

It launched four years ago in the Fierro Hotel in Palermo. Fierro currently sits at the top of Trip Advisor’s hotel listings for the city.

Most of UCO’s customers come from outside the hotel. Don’t be put off by the exterior, which is tucked away on a concrete-heavy street. Once inside, you’ll find a tastefully decked-out dining room and well-maintained garden area for al fresco dining.

The food is South America with European influences. It offers small, tapas-size dishes alongside bigger plates: the aim to encourage sharing.

Myself and three others worked our way through a sublime conveyor belt of flavors. Burrata, tomato, roasted aubergine and basil sprouts was followed by pork flank steak with hash browns and Mac sauce. The pork was delicious, in a light, fried, stickyish coating. The restaurant’s lamb empanadas – with a fresh squeeze of lime – were amazing.

UCO’s seven-course tasting menu costs ARG$1,080, which is around US$53 – terrific value.

Palermo is one of the more genteel and hip neighborhoods. Other notable establishments include Don Julio Parilla, Lab coffee and the vegetarian Bio (because contrary to its reputation, Buenos Aires cuisine is not all about the steaks).

Men in need of grooming should check out Salon Berlin – a hipster barbershop to take care of all your male grooming needs. 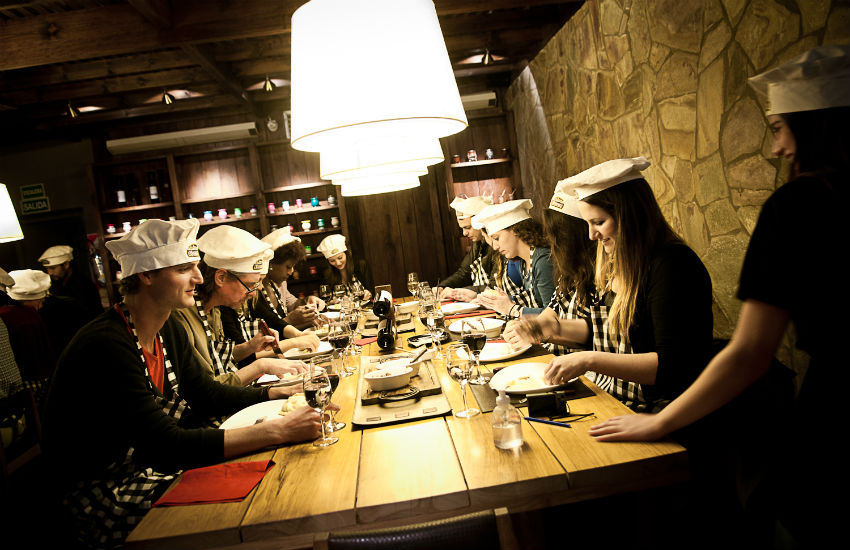 This very popular event is a opportunity to share a meal with fellow travellers, learn a little more about Argentine cuisine and have some fun. Running nightly, up to 24 diners sit around two, large tables.

Your hosts talk you through your dishes, explain a little about Argentine culture, get you to learn some Argentine phrases and gestures, and even show you how to make empanadas.

The main course, naturally, is steak, and the meal is rounded off with individual servings of mate and dulce de leche and biscuits. Some many find the experience a little on the cheesey side, but it certainly makes for a lively and sociable evening. 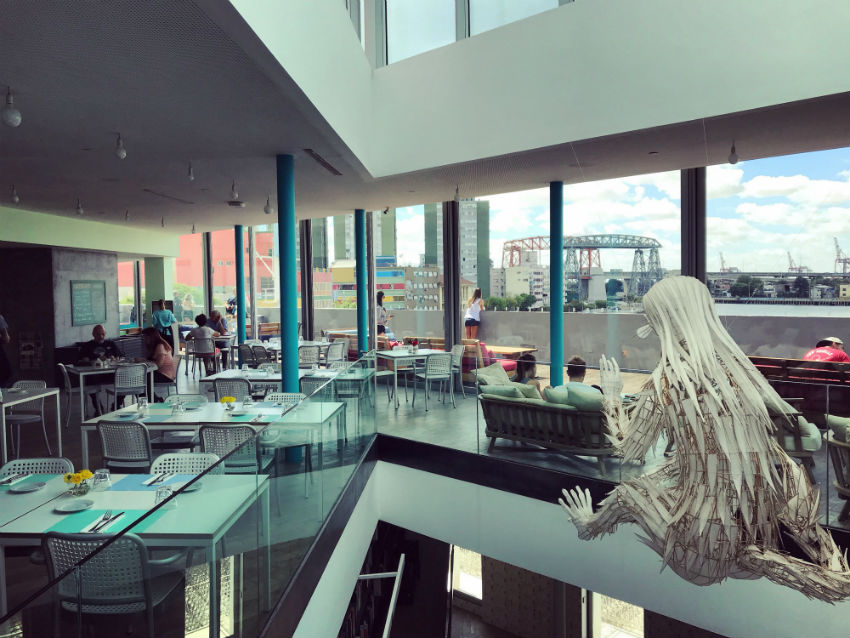 This large, private, modern art gallery is one of the best in the city. During my stay it was hosting a major retrospective of work of Chinese artist Ai Weiwei. It also boasts a great cafe-restaurant, with an outdoor terrace with views over the harbor.

Fundacione Prao is located in the Caminito district of La Boca, one of the oldest parts of the Buenos Aires. The area, although one of the rougher parts of the city, is full of colorful houses and is home to the famous Boca Juniors football stadium. It offers a very different perspective on the city to neighborhoods such as Recoleta and Palermo. 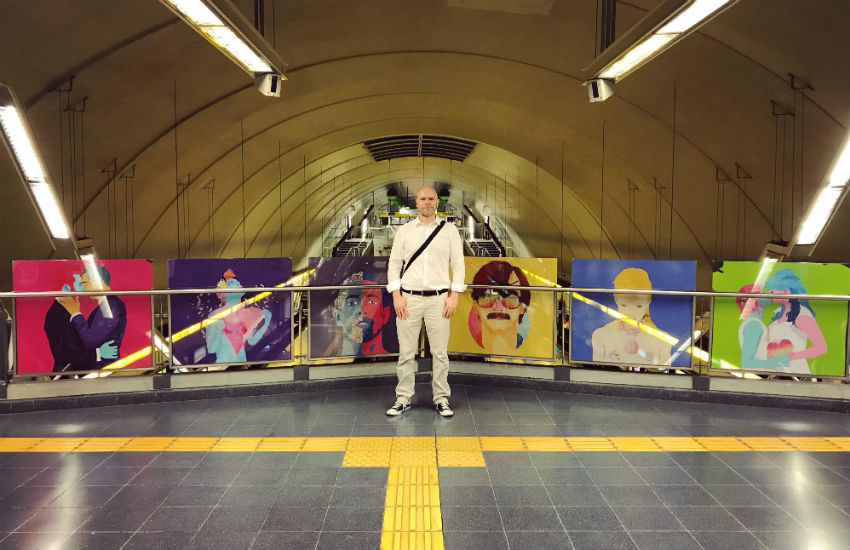 OK, Santa Fe – Carlos Jaúregui is just a subway station, but it’s worth checking out. It was opened last year and named after a local LGBTI rights activist and campaigner.

Carlos Jaúregui has been called the Argentinian Harvey Milk. Not only are many of the staircases decorated in rainbow colours, but there’s artwork depicting Jauregui and same-sex couples – quite a progressive statement in such a Catholic country.

The artwork is by Venezuelan artist Daniel Arzola – a queer artist who fled his home country fearing persecution for his art and sexuality.

Besides the aforementioned Pride Café, the Buenos Aires gay scene doesn’t kick off until night time… hardly anyone goes out before midnight at the very earliest!

Almost directly opposite each other in Palermo is the camp and glittery video bar, Peutou, and the slightly grittier, Work. The former is the place to go to enjoy the latest episode of RuPaul’s Drag Race, while Work is for those who want to dance to throbbing electro beats. 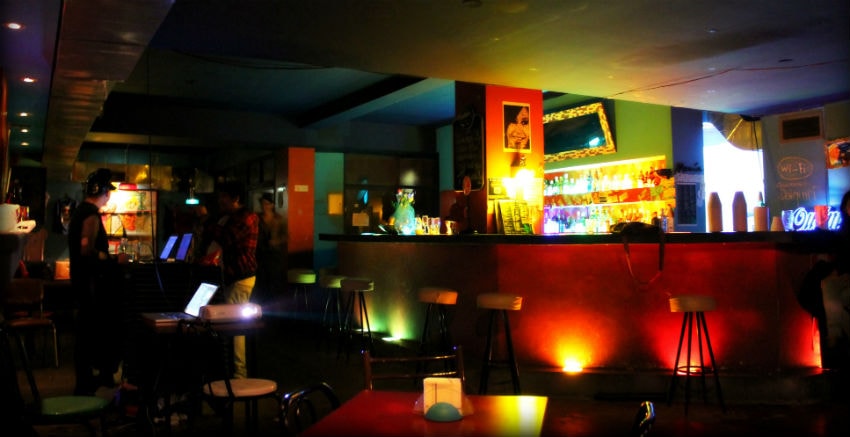 Other venues worth checking out include Sitges, Casa Brandon, and Amerika – one of the city’s first gay discos and still going strong.

Looking for something raunchier? KM Zero is a late night maze of cruise cabins, while Homo Sapiens is the biggest gay sauna in the city, with a dedicated day and evening clientele. 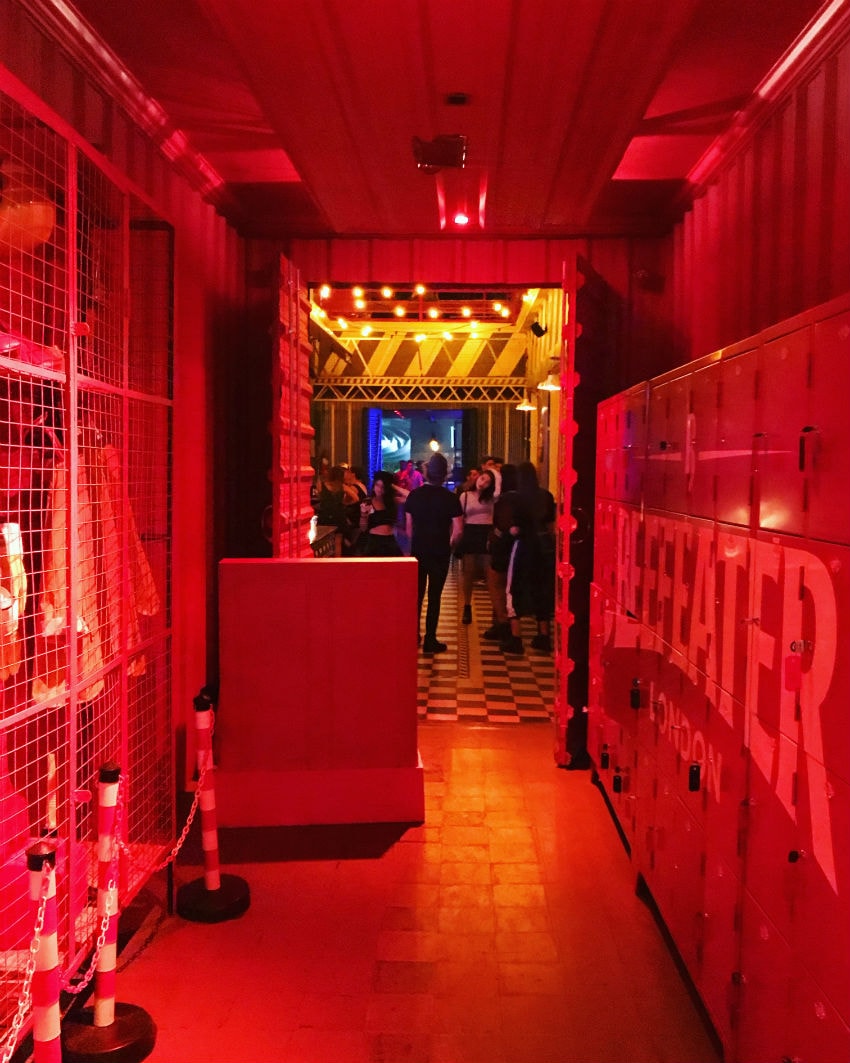 The entrance to Work in Palermo (Photo: David Hudson)

• If you’re looking for a quiet and luxurious base in the Recoleta neighborhood, the 34-room Serena Hotel is a sophisticated getaway for business people and tourists. It features a beautiful basement swimming pool and courtyard breakfast area, among other amenities. Read a full review here.
Serena Hotel, Libertad 1617, C1016ABG CABA, Argentina.

• Byblos is a block of serviced apartments in Palermo, with rooms to suit all budgets – starting from just US$60 a night. David Hudson enjoyed a premium suite with amazing views over the city, huge balcony and kitchen area for food preparation. Read a full review here.
BYBLOS Palermo Soho, El Salvador 4500, CABA, Argentina. +54 11 52186156. 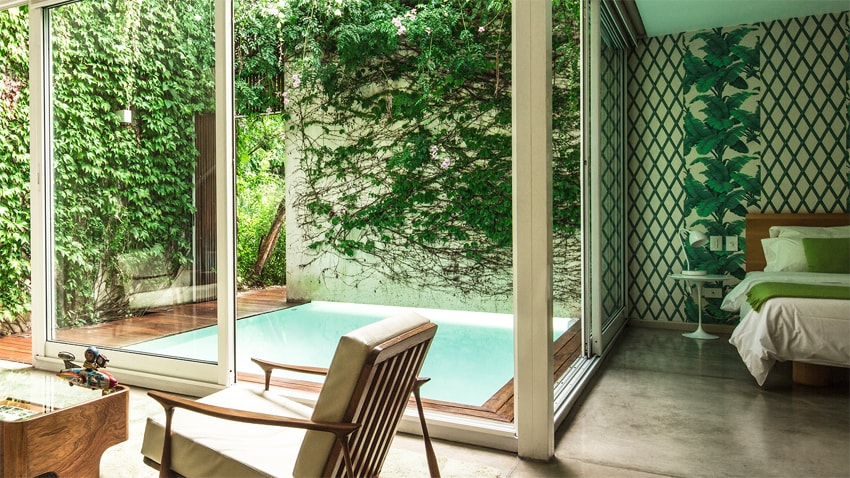 • Looking for a hip, boutique destination in one of the best parts of town? Home Hotel has been popular with tastemakers since it opened ten years ago. It remains one of Argentina’s coolest hotels. Situated in Palermo Hollywood, it’s surrounded by restaurants and bars in one of the safest neighborhoods. It features its own pool and a stunning garden area, overflowing with foliage and outdoor art. Read a full review here.
Honduras 5860, C1414 CABA, Argentina. +54 11 4779-1006.

Norwegian is continuing the expansion of its trailblazing long-haul network with its new direct route to Buenos Aires – the only low-cost route from the UK to South America. Norwegian operates four weekly flights year round direct from London Gatwick to Buenos Aires

All flights are operated by a fleet of brand new Boeing 787 Dreamliner aircraft with two cabins – Premium and economy. Fares start from £275 one-way and £589 return in LowFare economy and £640 one-way and £1,360 return in Premium including all taxes and charges and subject to availability. 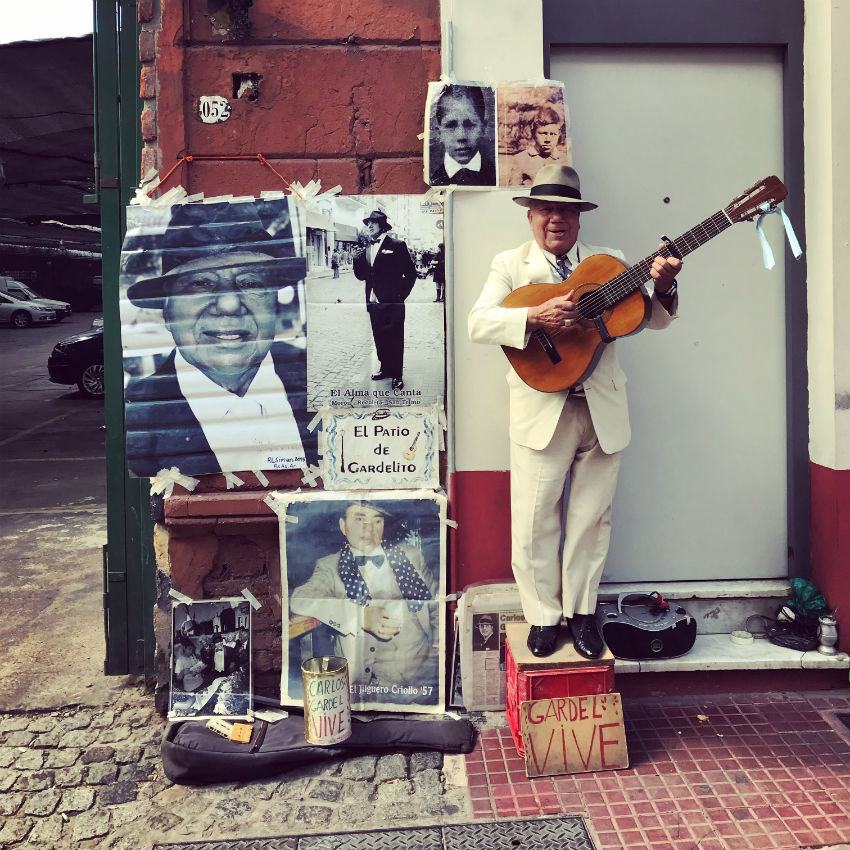