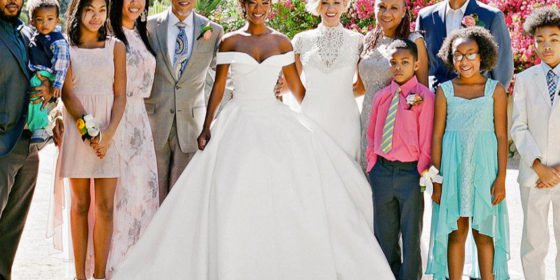 Firstly we have Mad Men star Kit and fellow actor John, who tied the knot in Ted Baker suits in February 2016 in Joshua Tree National Park. See more pics of the ceremony here.

Hollywood icon Lily got hitched to writer Jane in December 2013 after 45 years together. They got their marriage licence in LA before a private ceremony at a friend’s house a few days later.

Star Trek legend George married actor Brad in September 2008 at the Japanese American National Museum in LA. They’d been together 21 years by that point.

Olympic icon Tom and Milk screenwriter Dustin said their vows in a fairytale ceremony in Devon in May 2017. There wedding cake was, in a word, unforgettable.

@dlanceblack sees the wedding cake that @cupcakejemma and her team at @crumbsanddoilies made for the very first time on our wedding day! Check it out in the link in my bio or by going to my Instagram story and swiping up!

Rocket Man singer Elton and filmmaker David got civil partnered in 2005. They followed this with a star-studded wedding in Windsor in December 2014.

That’s the legal bit done. Now on to the ceremony! #ShareTheLove @DavidFurnish

Will & Grace star Sean got hitched to music producer and composter Scott in November 2014 in LA.

Back in September 2014, American Horror Story’s Cheyenne made an honest man out fellow actor Jason. They wed at a friend’s estate in Encino, California.

Actor Matt and singer/songwriter Blue put a ring on it in July 2015. The city hall ceremony took place in an undisclosed location.

They’re one of the cutest gay couples in the entertainment industry, and their wedding was fittingly cute, too. Taking place in September 2014, the How I Met Your Mother stars made honest men of each other in custom tuxes by Tom Ford in Perugia, Italy.

Finally, we have Orange Is the New Black star Samira. She married show writer Lauren in an amazing Martha Stewart Wedding in March this year in Palm Springs. And they both looked beautiful!