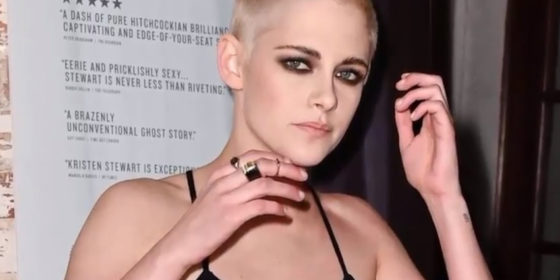 Ain’t Got Fair To Go singer Jess is known for her fiery mass of red hair, her daring stage garb and her love of achingly cool eyewear. There’s of course a distinct 90s vibe to her ensembles – the bright green trouser suit and platform boots she wore to the 2016 Brit Awards could have been from 20 (or 40!) years before!

Sarah’s red carpet looks are old Hollywood glamor epitomised. In the above shot from this year’s Met Gala, the American Horror Story star is wearing Prada.

The Valerian and the City of a Thousand Planets actress knows a thing or two about fashion having started out as a world-conquering supermodel. She looks equally amazing in structured tailoring as in glamorous ballgowns.

Like Cara, Personal Shopper star Kristen opted for a bleached blonde buzzcut this year; Katy Perry soon followed suit. She can often be found rocking high couture and hoodies in the same day. We recently chatted to the gay stylist on her film Personal Shopper about Kristen’s style secrets – read the interview here.

US writer and trans activist Janet is also a contributing editor for style bible Marie Clare. Her Instagram feed is one of statement earrings, carefree curls and formfitting dresses.

Pop singer sister duo Tegan and Sara were hipsters before the word ‘hipster’ was invented. The girls favor an androgynous style, and look effortlessly cool in blazers, leather jackets and t-shirts and skinny jeans.

Orange Is the New Black star Samira’s style is compellingly unpredictable. For the red carpet, it’s trouser suits or delicate dresses; when off-duty, it’s boyish backwards caps, loose-fitting shirts and t-shirts. But then, her flamboyant Christian Siriano wedding dress was the height of femme. We can’t wait to see what she’ll wear next.

She looks like a Disney Princess, but Aquaman star Amber doesn’t tend to go for the over-embellished looks of Cinderella and Sleeping Beauty. Her style is mostly characterised by clean lines and muted colors.

Since coming out in 2014 Juno actress Ellen Paige’s style has really evolved. She loves the odd collar and tie, but mostly her looks are pared-down and unfussy. She always looks comfortable, casual, and above all, confident.

On the flip side we have model Gigi. Her explosively colourful wardrobe is the dressing up box dreams are made of. Skin-tight lycra, tassles, leather, lace, feather boas, thigh high boots, corsets – she wears it all while having an absolute ball. We want her life.

Showbiz veteran Raven-Symoné also loves a pop of color, most notably in her hair, which has been everything from blue to yellow to blue. Deconstructing her style would take too long (she looks like a different person every time she leaves the house) but we’re living for this world flag shirt she wore on The View last year.

Like Ellen Paige, Evan has worn her fair share of tuxedos to events, while looking better in them than any man who springs to mind. The self-identified tomboy also swears by a baggy tee and a loafer.

Finally, Caitlyn… Love her or hate her, you can’t deny the reality star and former Olympian is one of the world’s most glamorous women, with a taste in clothes that leaves most of her extended family in the shade. Perhaps she owes it all to her stylist, but her look is a cross between Kate Middleton and Cindy Crawford – and it’s a winner.