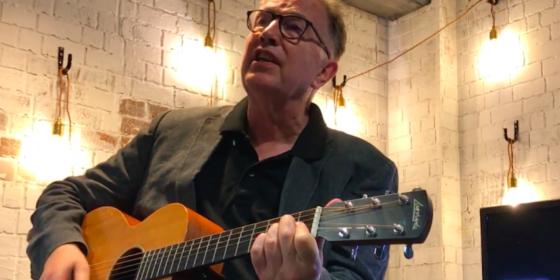 The Tom Robinson Band artist and 6 Music presenter, will sing the previously banned ‘Glad To Be Gay’ song live on the BBC.

He is performing at this weekend’s ‘I Feel Love’ BBC Radio 2 concert in the northern UK city of Hull.

27 July marks the 50th anniversary of the partial decriminalization of gay sex in England and Wales.

Speaking to Gay Star News has recounted his memories of the pain of growing up illegally gay in the UK.

The punk rock star tried to take his life when at school because he was scared of coming out.

‘All through the 60s as a music fan I heard great music but it was always about someone else. Same as the TV, films, books you read, magazines you bought. It was always boy meets girl.’

As he came to terms with his sexuality, he decided to use his avid love for music to spread a message. He wants no other young person would have to go through what he did.

‘I thought if in my own small way, if I chance to do that for someone else. I’ll try my best.’

He’ll be performing a version at the weekend with updated lyrics, including about some key changes in the law. The new lyrics talk about press coverage and the removal of section 28. He gave Gay Star News an exclusive preview.

Warning about the swinging pendulum of LGBTI rights

Speaking about the UK marking this important historical milestone he said:

Highlighting, in particular, the AIDs crisis:

‘Just as we were getting to a place of understanding, out of the blue came AIDs and hit us round the back of the head’

Getting emotional and holding back tears, he continued:

‘We saw lovers, friends and brilliant young people dying horribly in hospitals and we had no way of knowing it was coming’

‘We must guard against complacency, the price of freedom is eternal vigilance.’

Tom Robinson is part of season exploring on queer music and culture as part of 6 Music’s Loud and Proud season. It’s part of the BBC’s Gay Britannia series.