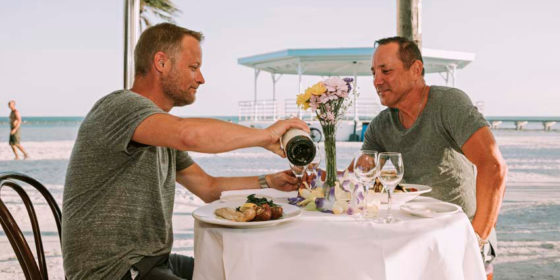 Sponsored: It’s a crying shame that many of the world’s most famously romantic destinations are in LGBTI-unfriendly places. But not The Florida Keys.

This chain of tropical islands off the southern coast of the Florida mainland are rich in romance and inclusiveness alike.

In this respect, the Keys are truly like nowhere else on earth.

They combine the breathtaking, edge-of-the-world beauty of the Caribbean or the Maldives, but with the playful queerness of San Francisco, Palm Springs or nearby Fort Lauderdale.

Since the introduction of gay marriage across the US in 2015, there is really nowhere better than the Florida Keys for a destination wedding or honeymoon in America.

But if you still need convincing, here are nine reasons why the Keys make for the perfect amorous escape…

Rain and romance are not a good combination. But thankfully, this is the Sunshine State we’re talking about!

That said, even by Florida’s standards, the Keys enjoys amazingly temperate weather most of the year.

Temperatures drop to a still balmy 21°C in January, and rise to a scorching 32°C in summer.

2 Ease of travel to and within the region

When treating your loved one to a sweet escape, the trip should be a stress-free as possible.

Well, in the Keys it’s impossible to get lost!

With 42 overseas bridges, including the spectacular 7 Mile Bridge, it’s one of the most iconic road trips you’ll ever embark on – for much of it, you’re surrounded by nothing but azure waters on both sides.

And with more flights than ever to the Keys’ gateway airports (Miami, Fort Lauderdale), getting here is easy. 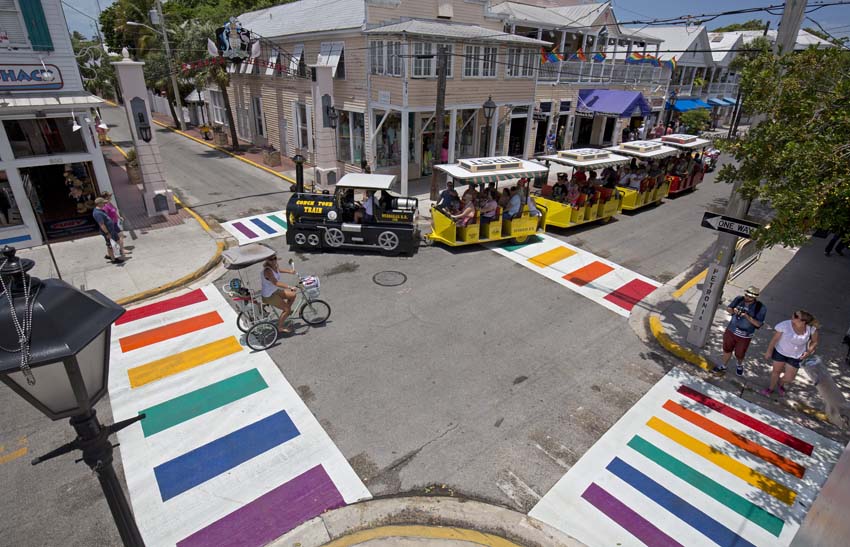 Sitting proudly on the most southerly tip of the archipelago is Key West, home to 27,000. Despite its tiny population, it’s forged a global reputation for being a cool and stylish hotspot.

Also, it’s a got an unabashedly queer vibe. Same-sex couples hold hands everywhere you look, there are an array of LGBTI watering holes, and Pride is a huge deal – it next returns in June 2018. Be sure to grab a selfie with your beau at the rainbow crosswalk on Duval and Petronia streets!

4 Not to mention the rest of the islands

Key West’s LGBTI-friendliness gave rise to the city’s motto of ‘One Human Family’. This inclusive attitude has since been adopted throughout the Keys.

You and your partner will be welcomed with open arms in each of the five Keys’ districts – Key Largo [pictured above], Islamorada, Marathon, the Lower Keys and of course Key West. 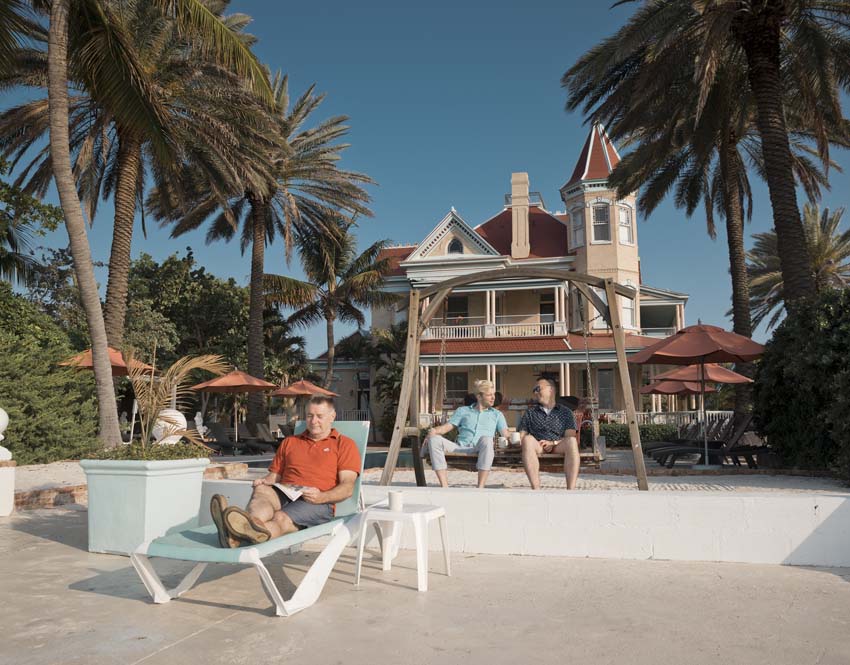 Bucking a global trend, a large handful of explicitly gay guesthouses continue to thrive in Key West, such as Alexander’s Guesthouse.

But there are places to stay to suit every taste throughout the region. For instance, the opulent Cheeca Lodge Resort & Spa in Islamorada is perfect for a beachfront ceremony. It was ranked as one of the world’s top 500 hotels by Travel + Leisure and is set amidst beautifully-manicured tropical flowers and palms.

If you’ve ever been stuck for a date idea, the Keys has you covered.

You could embark on a snorkelling excursion at John Pennekamp Coral Reef State Park in Key Largo, or try the Catch and Cook fishing experience at Robbie’s Marina in Islamorada.

If you want something outside the box, there’s the Turtle Hospital – believed to be the world’s first state-licensed facility of its kind – which even has its own turtle ambulance!  It’s rescued and rehabilitated over 1,500 turtles since the mid-1980s. 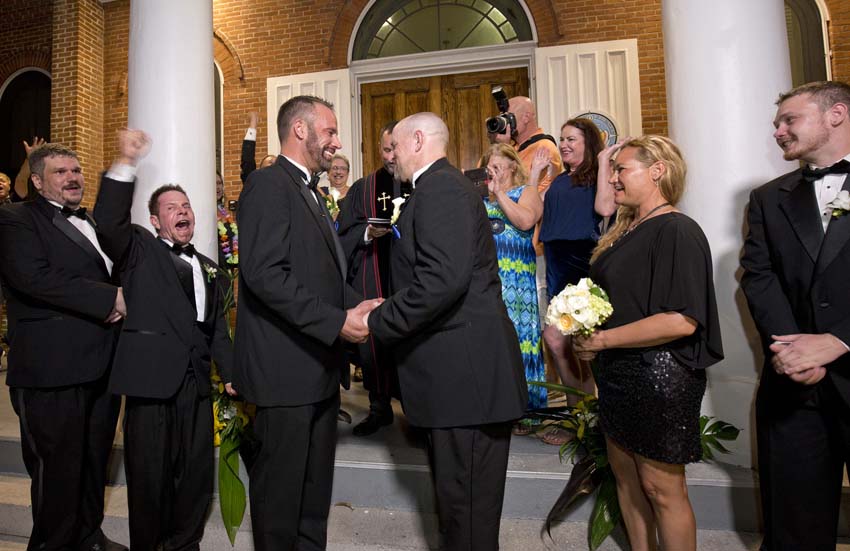 7 The region is a trailblazer for marriage equality

We have to give a special mention to Aaron Huntsman [centre left] and William Lee Jones [centre right], the adorable couple who became the first to obtain a same-sex marriage in the Florida Keys in 2015.

They completed their wedding vows on Tuesday 6 January 2015 in Key West (on the steps of the Monroe County Courthouse, in case you’re wondering). They paved the way for marriage equality in Florida with a lawsuit protesting the state’s 2008 ban on same-sex marriage.

It’s the official dessert of the Keys, and I went on a Key lime pie odyssey when I visited the Florida Keys in 2015. It of course culminated in a pitstop at Kermit’s Key West Key Lime Shoppe; a fabulous gay-owned business in Key West.

Elsewhere, I enjoyed one of the most incredible meals of my life at the waterfront Marker 88 restaurant in Islamorada, which serves the freshest seafood and steak imaginable. Unfortunately, I was single at the time…

There’s nothing more romantic than half-light, and in the Keys, staggering sunsets are a near-daily occurrence. This has given rise to the popular tradition of ‘sunset watching’, taken as seriously here as stargazing. (There’s plenty of scope for that too, owing to the Keys’ relative isolation).

The best spots to steal a kiss as the sun goes down? The aforementioned Marker 88 in Islamorada, at the daily sunset celebration at Key West’s Mallory Square or aboard Danger Charters’ Wind and Wine Sunset Sail. 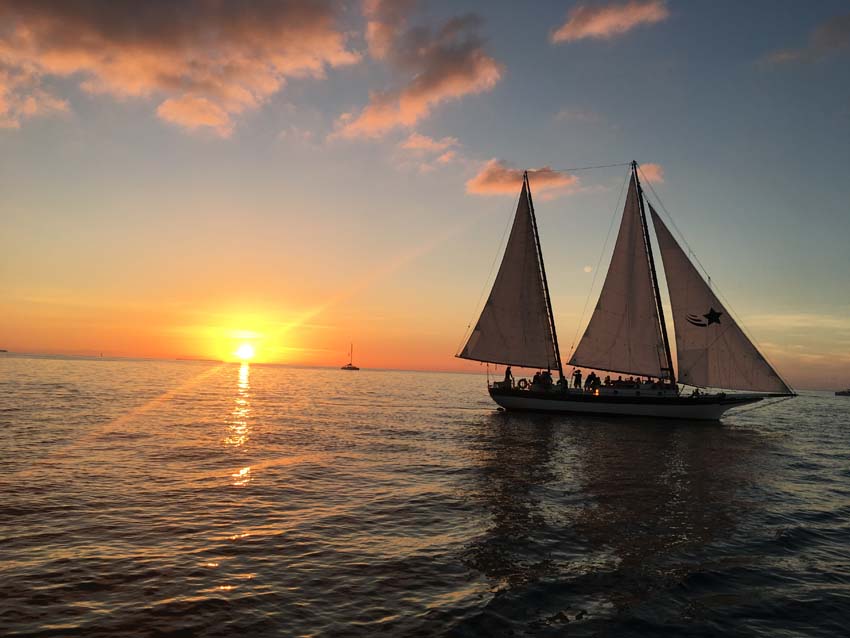 Finally, attendees of Brighton and Hove Pride could be in with a chance of winning their own holiday to the Keys this weekend.

Just head to the Keys’ stand in Preston Park (N5) for a ‘Sushi shoe selfie’. This is the giant six-foot high shoe belonging to the Keys’ most iconic drag queen, Sushi.

By sharing the pic on social with the hashtag #FLKeysShoe, you’ll automatically be entered into the competition. The prize includes a four-night stay at La Te Da Hotel in Key West and international flights.

Could be a great place for a wedding proposal…?

For more information about the Florida Keys, visit www.fla-keys.com/gay.

The Florida Keys and Key West is a client of Gay Star News. 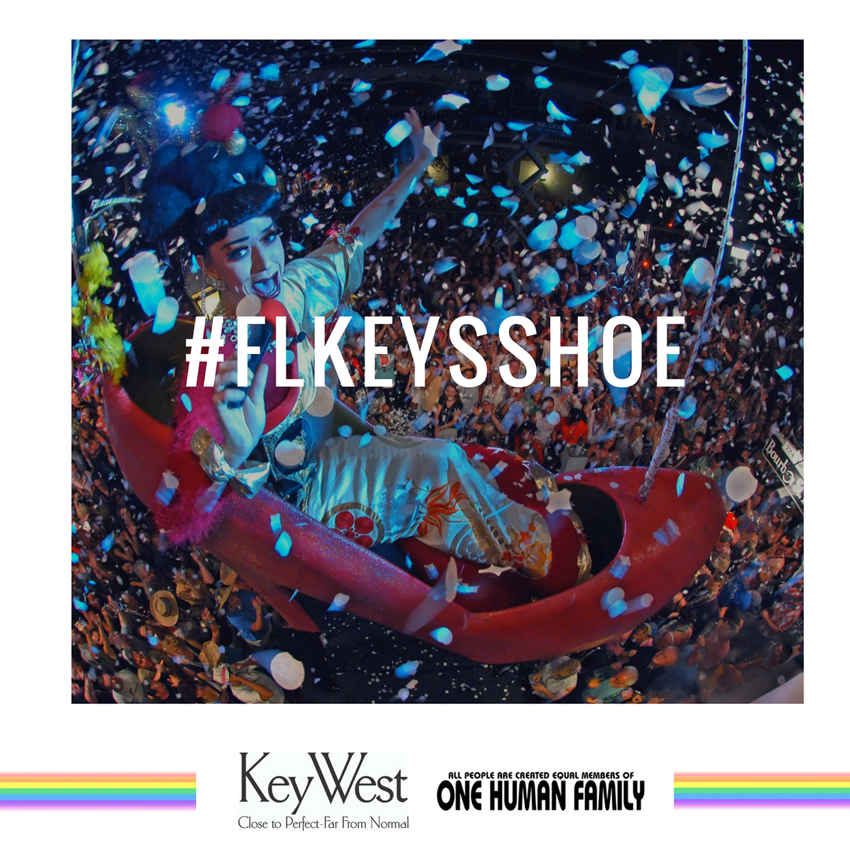