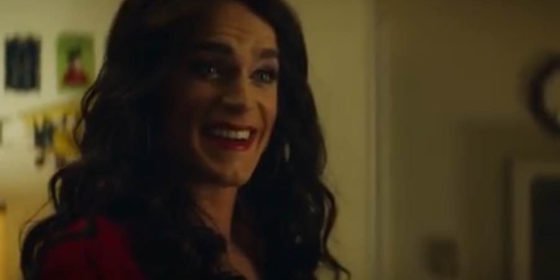 Matt Bomer plays a transgender woman in the film Anything set to have its world premiere at the Los Angeles Film Festival this weekend.

A scene from the movie based on Tim McNeil’s play has been unveiled ahead of the premiere.

It shows the Emmy-nominated actor transformed into Freda Von Rhenberg who earns a living as a sex worker in Hollywood.

The film earned solid applause after a private screening at the Directors Guild Theater in Los Angeles on Tuesday (13 June) from an audience that included several members of the transgender community.

This is significant because of early backlash over a cisgender male actor again being cast in a transgender female role.

Hollywood has done this for decades including recently with Jared Leto winning an Oscar for Dallas Buyers Club and Eddie Redmayne being nominated for The Danish Girl.

But the Bomer casting struck a nerve as transgender actresses like Laverne Cox are beginning to experience more success.

The film does include two transgender actresses in smaller roles.

The story centers on a suicidal Mississippi man named Early Landry (John Carroll Lynch), who after losing his wife is forced to move to Los Angeles so he can be cared for by his over-protective film executive sister (Maura Tierney).

Early quickly moves out of her upscale home to start a new life on his own in a small apartment complex in Hollywood.

He grows close to his attractive new neighbor Freda who is charmed by a man she calls ‘a sad Andy Griffith.’

Early’s loneliness and need for companionship leave his heart open to what starts as a friendship then grows into something deeper.

But can their growing affection be reconciled with the complexity of their disparate backgrounds?

Mark Ruffalo, who starred opposite the openly gay Bomer in the acclaimed AIDS drama The Normal Heart, is executive producing the movie.

Last August Ruffalo took to Twitter to respond to the negative reaction to Bomer’s casting: ‘To the Trans community. I hear you. It’s wrenching to you see you in this pain. I am glad we are having this conversation. It’s time. In all honesty I suggested Matt for the role after the profound experience I had with him while making The Normal Heart. The movie is already shot and Matt poured his heart and soul into this part. Please have a little compassion. We are all learning,’