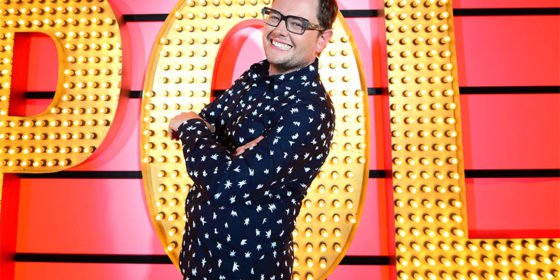 Comedian and chat show host Alan Carr has opened up about still feeling uncomfortable about his sexuality. Known for his camp humor, Carr admitted still feeling ‘a bit of guilt’ over being gay.

Carr, 41, was voted the most influential LGBT person in the UK in this year’s Pride Power List, unveiled at the weekend. He announced last year his engagement to his long-term partner, Paul Drayton.

Carr was taking part in the show’s Queer Icon series. To mark the 50th anniversary of the partial decriminalization of homosexuality in England, the show has asked notable LGBT people to nominate a queer work or art that has influenced them.

Carr discussed the book My Father and Myself by J.R Ackerley.

‘It’s a memoir,’ says Carr. ‘[Ackerley] was a full, out homosexual when it was illegal. He really didn’t care. And he wrote about it. He was born in 1896 and died in 1967. I found it really refreshing because you read a lot of gay stuff from the 60s and there’s hang-ups and depression and all, but he doesn’t care.

Ackerley, a British editor and writer, wrote candidly about sex with many men, including sailors, soldiers and waiters. Ultimately, he was seeking a soul mate. He also talks at length in the book about his complicated relationship with his father.

‘He’s so matter of fact, his homosexuality. Whereas I have a bit of guilt about it. I’m not totally comfortable being gay, but he’s so… he absolutely loves it. And for all the promiscuity about him, he’s very honest, because it starts out as an exploration of his relationship with his own father.

‘His father died and left him a note that he could only open once he’d died. And it was a complete revelation. The father had a mistress, three daughters … He had a secret life. You find out that the father actually had gay affairs himself.

Carr says he could relate to Ackerley’s writing about his relationship with his dad.

‘The relationship between him and his father, it is strained and then he sort of says at the end, “I didn’t know he had all this we could have talked about, we could have shared.” And I think a lot of gay men and their fathers are strained. I don’t think it’s unusual.

‘I mean, I remember when I came out it was really hard and awkward and uncomfortable. My dad was, and still is, is involved in football. He’s a football manager, this tough-talking Geordie, there’s no homosexuality ever in the family tree and then I came along.

‘I think there’s just something about a gay man and their father, it’s a minefield of emotions and worry and stress. To have it written down in a book, I could really relate to it and I hope people listening, if they maybe had issues with their father or they feel like their father didn’t really understand them, then maybe read this and I think you’ll be blown away at the end.’

Carr has talked before about his relationship with his father, including during his early comedy routines. His dad, Graham Carr, was formerly the manager of Northampton Town soccer club.

Carr is not alone in identifying issues between dads and their gay offspring. Earlier this year we highlighted a new photo project that concentrated on LGBTI people reflecting on their relationships with their fathers.

J.R Ackerley was best known as the literary editor of BBC magazine The Listener. During his time at the magazine he discover and published many noted young poets, including WH Auden and Christopher Isherwood.

His father, Roger Ackerley, was a successful, London-based fruit merchant. His business ensured the family had a butler and Ackerley was able to attend private school.

Ackerley’s memoir, My Father and Myself, was published in 1968, shortly after his death and a year after the decriminalization of homosexuality.