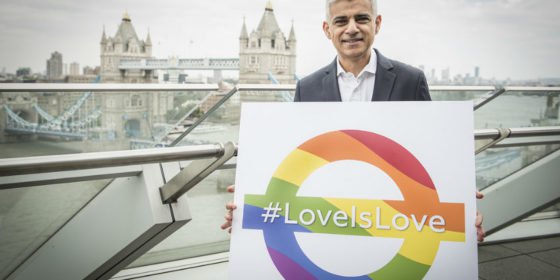 The London Underground will remove all gendered language from train announcements.

Transport for London’s boss of Customer Strategy, Mark Evers, said he wants ‘everyone to feel welcome on our transport network.’

‘We have reviewed the language that we use in announcements and elsewhere and will make sure that it is fully inclusive, reflecting the great diversity of London,’ he said.

As a result, announcements will now address passengers as ‘everyone’ instead of ‘ladies and gentlemen’.

London Mayor Sadiq Khan said last month: ‘TfL has made a commitment to transition from gender-specific phrases like “ladies and gentlemen” which are currently used in announcements, to a gender-neutral alternative such as “good morning/good afternoon everyone”.’

The move comes about after a 19-year-old transgender woman, Aimee Challenor, was the victim of a transphobic comment.

Challenor called Transport for London’s Oyster card helpline, due to problems with her transport card. The conversation escalated when the TfL worker told Challenor she ‘didn’t sound like a miss.’

‘I knew it wasn’t right,’ she told the Independent. ‘London is massively diverse and it’s something we should be incredibly proud of. I knew it had to be raised, if it affected me it could affect anyone.

‘I wish that person hadn’t done that and I do blame them for it in a certain sense but it also shows the TfL culture, the training isn’t where it needs to be – trans has become public knowledge now,’ she said.

Khan responded to the comments: ‘TfL’s approach is centred on treating everyone equally.

‘Under this approach it does not offer trans-specific training, but rather ensures that all staff put equality and fairness first.

‘I have asked for a review of training and procedures to ensure that TfL is always providing a professional, respectful service that is inclusive and sensitive to the needs of all Londoners,’ Khan said.

TfL briefed its staff on the new procedures, with new prerecorded train announcements in the works.

Mayor Khan said well-meaning staff may slip up and use ‘ladies and gentlemen’ but will issue gentle reminders to staff.

Khan said: ‘Transport for London serves a vibrant, diverse and multicultural city. Provision of an inclusive transport service is at the heart of TfL’s purpose.

‘Some customers may not relate to or feel comfortable with the way that certain station announcements are made.

‘I am keen that TfL addresses these concerns by speaking in a more neutral way when referring to gender,’ he said.