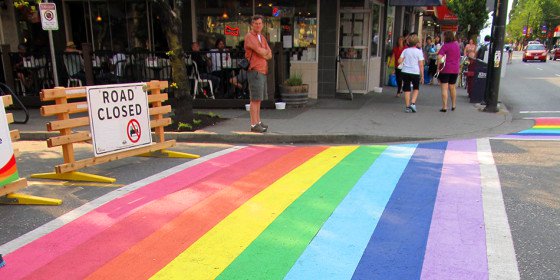 Many cities across the globe have installed rainbow crosswalks in honor of Pride month.

Now, a petition started by transwoman and LGBTI advocate Sarah Rose urging the City Council of Atlanta to make the rainbow crosswalk a permanent fixture has been honored. More than twenty-two thousand people have supported this petition.

On the anniversary of the Pulse Nightclub shooting in Orlando, which took 49 LGBTI lives, Atlanta’s mayor Kasim Reed announced that the city will paint crosswalks in midtown rainbow colors permanently.

‘Today, on the anniversary of this horrific event, we remember those whose lives were lost and those that were forever changed. Our thoughts and prayers were with you then, and they remain with you today,’ the mayor said Monday.

‘I believe that symbols of unity matter; in recognition of the outstanding and ongoing contributions of Atlanta’s LGBTQ community to our city, I am pleased to announce today that the City will install the rainbow crosswalks at the intersection of Piedmont Avenue and 10th Street year-round.’

This intersection is an important location for the LGBTI community in Atlanta, even described as the ‘epicenter’ of Atlanta’s LGBTI culture in Rose’s petition.

‘It is fitting that such an important and recognizable place should feature the rainbow flag,’ Mayor Reed said.