The opposition party in Australia is set to back a plan which will enforce campaign laws on the same-sex marriage postal vote.

Labor party leader Bill Shorten has said that it is likely the party will support laws which will control campaigning on same-sex marriage, on the condition that Special Minister of State Mathias Cormann releases the legislation as soon as possible.

Because the postal vote is being conducted by the Australian Bureau of Statistics, rather than the Australian Electoral Commission, it means that the vote is not subject to the Commonwealth Electoral Act’s prohibition on the use of any malicious or deceptive material.

Many feared that because this law could not be imposed, the campaign in the lead up to the vote would become a “hate speech bonanza”.

LGBT campaigners warned that this means that the anti-gay marriage campaign will be essentially free to peddle outright mistruths and homophobic smears with little recourse when the vote goes ahead.

However, Labor’s legal affairs spokesman Mark Dreyfus suggested Labor’s support for the special law, saying “our inclination is to make sure that this is a respectful debate”.

“If the government won’t stand up to the disrespectful and misleading and offensive things that have already been said – we gave Malcolm Turnbull an opportunity in the Parliament last week to condemn for example Bronwyn Bishop’s appalling comments.

“He didn’t. If the government won’t do that, perhaps we do need to look at other measures,” Dreyfus added.

The vote has been widely condemned by LGBT activists because it is not legally binding and will come at a huge expense to tax payers with the cost sitting at an estimated $122 million. 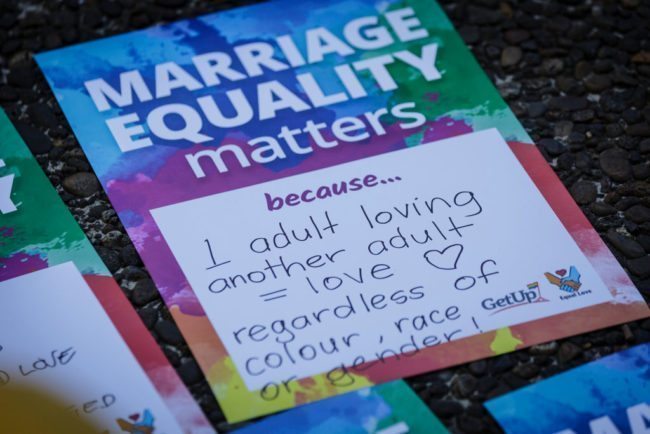 A lawsuit has been launched by The Public Interest Advocacy Centre (PIAC) in the High Court in a hope to veto the postal vote.

If the case falls through then Labor will only support Cormann’s legislation if they can view the bill prior to voting on it.

Cormann said that​ “Australians will judge anyone harshly, on either side of the debate, who pursues inappropriate and offensive arguments”.

Small Business Minister Michael McCormack, who is in charge of the Australian Bureau of Statistics and will be in charge of overseeing the postal vote once described gay people as “sordid and unnatural”.

The postal vote comes after an attempt to propose a Parliamentary vote was voted down by the leading Liberal party.

Politicians then tried to revive a plebiscite bill but it was voted down in the Senate.

Even though the public will be voting on the bill, they will not be given the opportunity to see it beforehand.