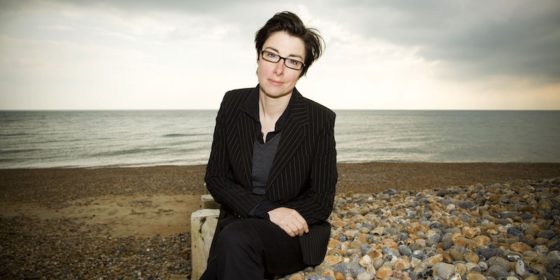 Sue Perkins struggled with her emerging sexuality alongside her then-boyfriend, who also turned out to be gay.

Sue once said that being gay was the ’47th most interesting thing in my life’ often playing down talking about being gay in interviews.

However, in the latest edition of the Radio 4 show, she broke from that.

Perkins spoke of her fury at the need to label sexuality in binaries instead believing that ‘sexuality is a spectrum’.

Growing up gay can be lonely

In the endearing interview Perkins said she didn’t know anyone was gay when growing up.

The words almost appeared to surprise her as she gave the interview.

Speaking about having a boyfriend when she was younger, Perkins remembers it as a complicated relationship as they were both going through a confusing time.

They both turned out to be struggling with similar problems with their sexuality; he was gay as well.

But, Perkins said people shouldn’t dismiss their time together ‘it was a real sexual relationship… but we evolved quite slowly.’

When she finally came to the realization she was gay, Perkins said she felt sick.

‘It was so far from my frame of reference that when it was presented to me as truth, I had that violent reaction. And then it all made sense.’

Perkins described being a shy child and how she used alcohol to boost her confidence as part of a rebellious streak.

In her memoirs, Perkins spoke about drinking heavily to compensate for being shy. Her reliance on alcohol in this way led her to get very ill with a stomach ulcer.

‘I’m grateful to that stomach ulcer; it was too easy to be that drunk… I’m not sure I would have escaped [alchohol’s] clutches,’ she told Radio 4.

Coming out to her mom over a slice of toast

Perkins also recounted this adorable story of coming out to her parents.

After being urged on by her ‘magnificent friend Sarah’ who set down an ultimatum, Perkins picked up the phone.

‘I remember her eating toast and she asked why I wanted to come for tea before she carried on munching away.’

Perkins Mum replied ‘Is this because you are gay?’

Perkins wishes it could be that easy for everyone to come out.

‘Everyone should have that experience, of their mom eating toast and going – it can wait, it can wait.’

A powerful relationship with Mel Giedroyc

In the Radio 4 show, you pick 10 songs you’d take with you to a Desert Island.

They’ve long been both friends and comedy partners, starting their early careers at Edinburgh Fringe Festival.

Perkins says they can be ‘so powerful’ as she recounted her first memories of meeting Geidroyc.

Perkins remembers seeing Mel for the first time in ‘dusky pink Doctor Martins, a shock of bleached blond hair and hearty laugh,’ and recounted her realization, they’d know each other together… ‘I just wanted to move into her orbit’

The duo is well known for presenting the Great British Bake Off series on BBC One.

In the interview Perkins said the pair were so in tune when the offer came in to host GBBO, it was never a question of if they’d present the show – but how they’d do it.

Perkins said putting a label on what she was made her furious, but spoke of the attitudes of younger generations.

‘I am hugely cheered by the fact my goddaughter has friends at school who are pansexual.’

The presenter Kirsty Wark asked: ‘What even is that? Says the mother in the room.’

Perkins replied: ‘I don’t know but it doesn’t matter. I always thought it was a spectrum and I have been furious and dumbfounded I had to make a binary choice.’

However, Perkins said she tries to downplay sexuality as a thing in interviews because she believes the more she plays it down, the more others can.

‘Why should people have to go through this painful stressful archaic ritual of going home to their parents and telling them they are having sex?’