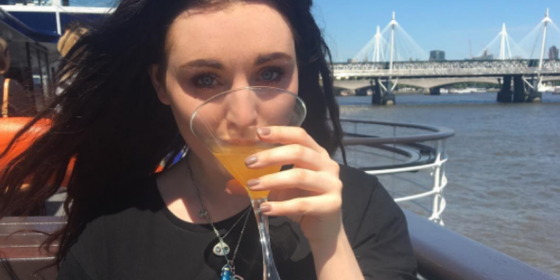 For many queer women on Twitter, @queerboudica is a sort of icon.

Going by the name ‘Jude’ online, Lottie Maddison tells hilarious dating stories. And she gets real about how hard being a student can be.

A fun topic of discussion for any LGBTI person when they first meet is coming out stories. And so I was excited to hear hers, expecting a story as iconic as she is.

‘I’m very lucky and incredibly privileged that with my parents, it’s never been a thing. They never assumed or presumed anything ever. They’re quite young parents, kind of old hippies. They’re really cool,’ she explains.

‘I was just kind of like, one day, I’m dating this person and then sent them a link for my Mom to stalk on Instagram of this person. And it was obviously a girl. And that was it.’

‘She went “Ooo you like the ladies do you?” and a wink face, and then it was just “What you doing tomorrow?”. There was no big come out.’

Originally, Jude was much more subtle about her sexuality. She came out to her extended family by simply changing her Facebook relationship status to ‘in a relationship’ with a girl.

‘Over the last year or two have been getting more and more just like open and not even like brave, just open and honest about it.’

Jude joked every time she went home from uni, she’d be a little bit more gay.

‘I went in a sparkly t-shirt and long blonde hair and came back and I had like shaved black hair and a longline t-shirt. And my mom was like, “What’s happened?”. I was like “Soho, mom”. Soho does things to people.’

‘You can always count on queer people’

Before fully coming out, Jude had already began building her community.

I first ‘met’ Jude online. Neither of us can remember how we came to follow each other. But after following Jude, I soon had my eyes opened to multiple other amazing queer women on Twitter.

There’s a certain sense of friendliness and security we both acknowledge when it comes to the queer Twitter community.

Jude says: ‘It’s familiar and comfortable, and I think queer people are a lot more open minded and friendly in general. I don’t know why. They’re just a lot more accepting. I think that’s why I feel more comfortable. You can always count on queer people to be there if you need a shoulder to cry on.’

Jude explains how she’d never really thought about being someone with a following. But what she has appreciated in the last year is the ‘Baby Gays’ who’ve messaged her.

She tells me of how often, young queer women who’re just turning 18 or who’ve just come out will ask Jude to take them out to Soho so she can show them the best places and how to talk to women.

‘Honestly I think my only proper friendships come from the online community,’ Jude says.

There’s typically a social stigma that friends made online aren’t as genuine as friends made offline, but she disagrees with this vehemently.

‘The people I properly deeply am invested in and care about have all come through Twitter or another online platform. I met Pip when we were 14 on Tumblr and then we both got gayer and gayer.’

Pip and Jude have met in real life since they became friends on Tumblr. Her Twitter account, @pipsuxx, features interviews with queer music artists. This is just one of the many friendships Jude thanks the internet for.

‘I made a couple of friends who are quite big on Twitter now. When we all first met when we were 14, we were all straight. And then we all realized over the years that we were all ragingly queer.’

‘I hope I can offer things to other people’

‘It’s educated me so much. I’ve learnt so much from other people that I’m lucky I have my friends. They’re also kind of mine educators. I hope I can offer things to other people, even if it is just how to get over a hangover quickly or, how to get a G-A-Y membership card. We all learn from each other so much, and that’s quite an invaluable thing. I love the community.’

A noticeable amount of @queerboudica’s content consists of Jude talking about her dating life.

Jude explains: ‘I’m just excited I’m getting any attention at all. Growing up I obviously wasn’t into boys like all my friends were. So I missed out on that giggling about your crushes at sleepovers with friends.

‘So for me, I feel like I’m a 15-year-old experiencing crushes for the first time and falling in love for the first time. And if I could, I would share that with a bunch of friends on a night out. But I can’t because the people I want to share it with are online. So, I just put it onto Twitter instead. If I’ve been asked out on a date then I want to show off about it: Guys, guess what happened to me today?’

‘I had to live on a sofa bed for a year’

As well as her dating life, Jude talks candidly about the reality of being a student. (‘I couldn’t afford the private halls down the road where most people went. So that’s why I had to live in a kitchen on a sofa bed for the whole year.‘).

She also discusses her jobs. One of those got her caught up in the London Bridge terror attack on 3 June.

‘It all kind of seemed a bit exciting to start with until everyone realized it was actually quite horrifyingly serious. And as every half an hour went on and more helicopters started to go over and it was kind of horrifying,’ Jude recalls.

She worked on a boat bar on the Thames with her flatmate and so the pair of them tried repeatedly to get a cab home. After they’d evacuated all the customers, they found they couldn’t leave themselves.

‘360 was just every different kind of siren noise’

‘I was just mopping the deck, and all around, 360-degrees, was just every different kind of siren noise. At first it was “oh this is a bit different”, then it got to 3am and it was just silence. Central London on a Saturday night is usually raucous.

‘Eventually, nine of us plus a security guard locked ourselves in for the night and we slept in the bottom level of the boat. I got up the next morning and walked behind the bar and started serving.

Then Jude told a story of what went on two weeks later: ‘We looked at the CCTV footage from that night and at about four in the morning when we were asleep, a guy broke onto the boat and walked into the room where we were sleeping and took stuff out of ours bags. It was really scary.’

‘How did it go from nothing to being the worst thing ever?’

With the current state of the government in the UK, we of course had a brief chat about Theresa May.

Jude believes the Conservative Party resents Theresa May, and they’ll take a vote of no confidence against her.

‘I don’t believe she’ll be asked in for a second term at all. She will be out. I think she’ll be out by the end of the year. You know what happened to Margaret Thatcher. Everyone turned against her and kicked her out over night. I think our Theresa is heading that way for sure. I kinda hope so’.

On the Tory and DUP deal, Jude says: ‘I’ve never heard of these people until today and now they’ve literally ruined my life. How did it go from nothing to being the worst thing ever? Again, I’m lucky my entire family is very left and anti-Tory forever and ever. They’re always just as angry as I am.’

‘You kinda have to give her [Theresa May] credit for being so outrageously awful. If you’re gonna be bad, do it properly.’

Yes I am pouring vodka into an ice sculpture of London landmarks, obviously

‘Come sit with us’

While still a student, Jude started working on Jax, an app for non-binary and trans people as part of a university project. She has now started working full-time at a start up app company so she can get the experience she needs to launch Jax properly.

She shares the heartwarming story of how she dreamt up the concept for the app.

‘So I used to work in SHE bar in Soho. This trans woman came in and I could see she was very nervous. She wasn’t very shy, but you could tell she wasn’t very comfortable, as you are when you go anywhere by yourself.

‘A bunch of queer women were there, just having some drinks. It was a really quiet evening, so I could hear everything that was going on.

‘On the way back from the loo, one of the women reached out to her and said “come sit with us, who’re you waiting for?”. She said “oh nobody, I’m just kind of here to hang out”.

‘She missed out on that kind of girly adolescence’

‘Then they invited her into their circle and the trans lady was talking about how she had a wedding the next month and it was the first wedding she was going to presenting as a woman.

‘Then they were sharing style tips and advising her when to put her nail varnish on and all the things we presumably learnt as teenagers – make up and stuff. We learnt through trial and error at sleepovers. She missed out on that kind of girly adolescence!

‘So to hear her being advised by all these women who were telling her this this and this, and take a spare pair of tights because you’ll get a ladder in them. All this stuff we took for granted, she never had that.

‘So I was like, how can I recreate that situation for people who aren’t necessarily able to go to a woman orientated gay bar? That was the beginning of it. It was sweet.’