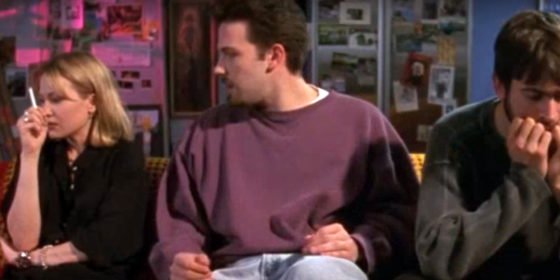 Ben Affleck considered himself a ‘serious actor’ after kissing another man in the movie Chasing Amy.

Smith recounted that Affleck and his co-star Jason Lewis were both apprehensive about doing the kissing scene, something Smith says was indicative of most actors’ attitudes in the mid 1990s.

According to Smith, Affleck said, ‘A man kissing another man is the greatest acting challenge an actor can ever face.’ Upon completion of the kissing scene, Smith recounted that Affleck stated, ‘Now, I’m a serious actor.’

Chasing Amy concerns a comic book artist (Affleck) who befriends a lesbian (Joey Lauren Adams) and gradually falls in love with her. She returns the feelings and they start a sexual relationship, much to the chagrin of his best friend (Jason Lee).

Smith wrote the script with Affleck in mind, but didn’t tell the actor until the script was almost finished. When he telephoned to say he wanted the future Batman actor for the lead, Affleck was delighted.

Smith reported the 24-year-old Affleck, who had never gotten a leading man offer, responded, ‘Finally, you recognize the skills.’ 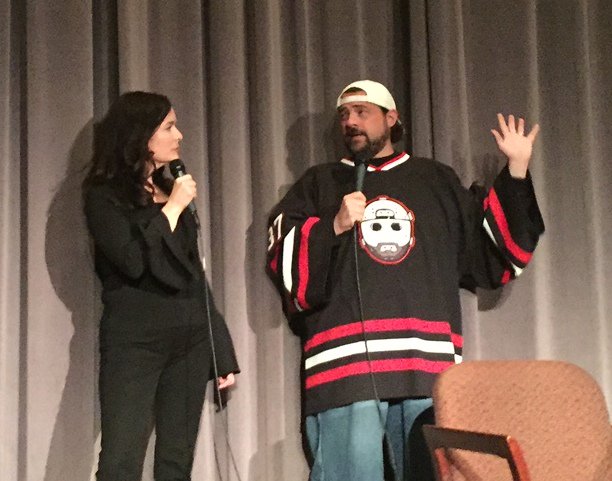 Smith had a film deal with Miramax. He presented Miramax with the script and a proposal for a $3 million (€2.61 million) budget, along with his casting suggestions.

However, Miramax refused to approve that budget, telling him that the movie business wasn’t about doing movies with your friends.

Miramax had better-known actors in mind, all people with whom they had holding deals.

Smith was not interested in doing it with that cast. He wanted to work with his friends. Joey Lauren Adams was his girlfriend. Affleck and Lee had been in his second film, 1995’s Mallrats, as had Adams.

The film shot over 28 days in 1996, primarily in suburban New Jersey, where Smith lived, and a few days in New York City.

The inspiration for the script came after Smith and his producing partner, Scott Mosier, were at the 1994 Sundance Film Festival with their first movie, Clerks, about convenience store clerks.

They met director/writer Rose Troche and actor/writer Guinevere Turner, who were at Sundance with their first movie, Go Fish, a lesbian romance.

Smith and Mosier hung out with Troche and Turner throughout the film festival. The two men had never met out lesbians before and were fascinated by their lives and their stories.

Turner appears in several scenes early in the movie as a singer and girlfriend of Adams’ character.

In the 1990s, Miramax was the major distributor for indy/art house movies. The studio’s movies had a certain style and a reputation for excellence.

After viewing Chasing Amy for the first time, Smith recounted that Miramax head Harvey Weinstein wiped away tears and said, ‘That is a Miramax movie!’

But Weinstein wasn’t the only one Smith made cry. When he showed it to his parents, his mother also cried. She hadn’t liked his previous two movies, but loved Chasing Amy.

‘I felt like an artist for the first time,’ Smith said after getting his mother’s praise and tears.

Similarly, Smith’s 18-year-old daughter saw the movie for the first time at Saturday’s Outfest screening. He reported that when the movie ended, she rushed to hug him with tears in her eyes and commented how young he looked in the film.

The 46-year-old director reported the movie was well received among lesbians, even though it was written from a man’s perspective.

He speculated that there was so little lesbian representation in film in the mid 1990s that they were happy just to see themselves on screen.

Miramax initially released Chasing Amy on the art house circuit in spring 1997. The studio was so pleased with it, they released in wider to 500 screens in April 1997.

It ultimately made $12 million (€10.4 million) at the box office, Smith reported.

Watch the trailer below: