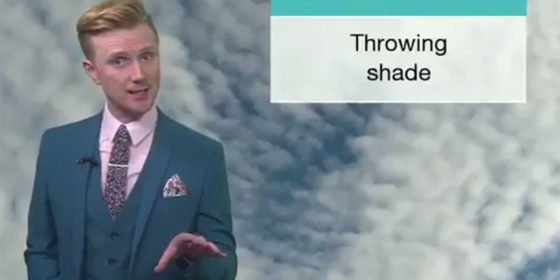 ‘These clouds are serving some serious shade,’ a BBC weatherman said to celebrate International Drag Day.

The Welshman  began: ‘Now listen guys, I’m going to spill the tea, alright, and tell you that some of these clouds today are going to be throwing some serious shade’.

Referencing queens from the show, he told viewers: ‘This weather front brought us some rain yesterday, which was great news for our Nina Flowers in the garden.

‘But I hope you didn’t get Courtney Act in any downpours.’

Howling! Just woke up here in Melbourne and nearly spit out my coffee.

Explaining the weather front has ‘sashayed away’, he added: ‘Now that sunshine Charlie Hides behind all of this cloud for a time’.

There was also a reference to Eurovision winner Conchita Wurst, saying it was hoped the temperature would ‘rise like a phoenix’.

The very gay forecast was liked more than 4,000 times on Twitter.

RuPaul quoted the video, writing on Twitter: ‘Owain, you are the winner of this week’s challenge.

‘You have won a gift certificate for BoobsForQueens.com.’

And Hides, who is mentioned in the video, said: ‘Howling! Just woke up here in Melbourne and nearly spit out my coffee.’