The anti-LGBT bill outlawing same-sex marriage in Bermuda is on John Rankin’s desk. John Rankins is the Governor of Bermuda.

Earlier today ignoring international frustration, the Bermuda Senate voted for the bill to eliminate equality in their country.

If the measure becomes law, the British overseas territory will become the first territory in the world to take away the right of same-sex couples to marry.

“If Governor Rankin signs this measure into law, it will rip away the right of loving same-sex couples in Bermuda to marry. That’s unconscionable,” said Ty Cobb, director of HRC Global. “With international business and tourism as its major industries, Bermuda’s people, international reputation, and the economy would all be harmed by this legislation. It is crucial that Governor Rankin reject this assault on equality.”

This was echoed just yesterday by Kevin Dallas, the CEO of the Bermuda Tourism Board.

He wrote this letter to Bermuda’s Senators, but it was unsuccessful.

The transcript of his appealing letter:
Dear Senators,

Since last Friday’s vote, we have seen ample evidence of negative international headlines and growing social media hostility towards Bermuda that we feel compelled to express our concern about what the negative consequences could be for tourism if the Domestic Partnership Bill passes the Senate this week. We believe the Bill poses an unnecessary threat to the success of our tourism industry. We urge you to vote no and appreciate the opportunity to lay out the reasons why.

Importantly, we do not view domestic partnerships as a negative in isolation. In fact, many jurisdictions permit domestic partnerships without adverse impacts on their economies. The circumstance in Bermuda is different – and troubling – in one important way: same-sex marriage is already the law of our island and to roll that back for what will be seen as a less equal union will cause us serious reputational damage. 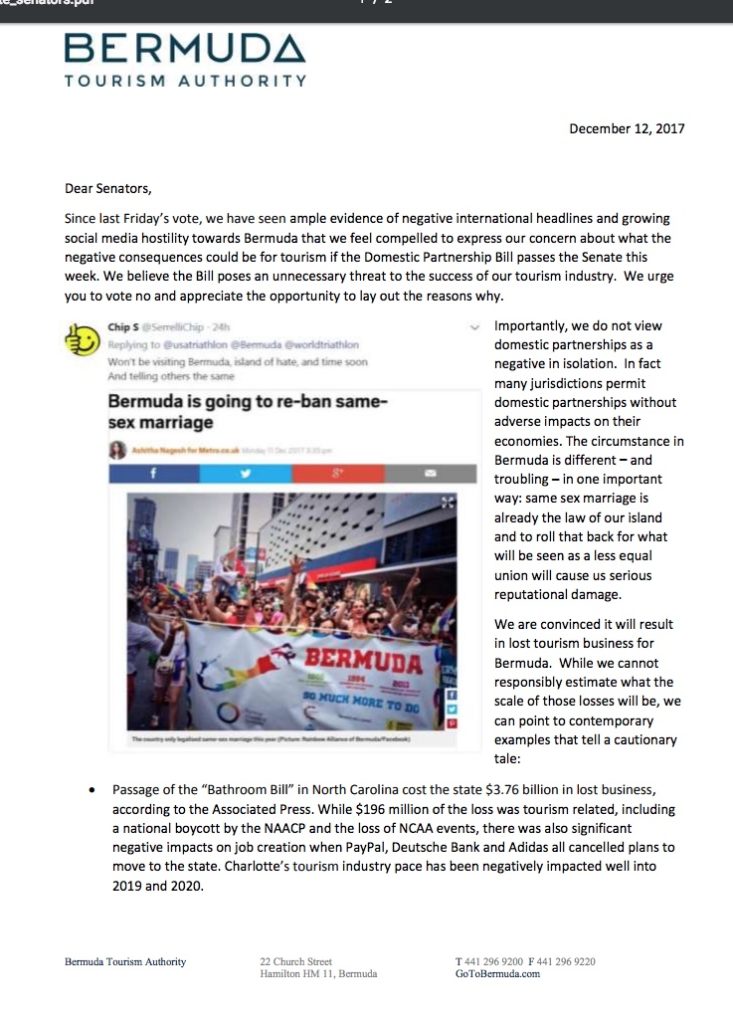 We are convinced it will result in lost tourism business for Bermuda. While we cannot responsibly estimate what the scale of those losses will be, we can point to contemporary examples that tell a cautionary tale:  Passage of the “Bathroom Bill” in North Carolina cost the state $3.76 billion in lost business, according to the Associated Press. While $196 million of the loss was tourism related, including a national boycott by the NAACP and the loss of NCAA events, there was also significant negative impacts on job creation when PayPal, Deutsche Bank and Adidas all cancelled plans to move to the state. Charlotte’s tourism industry pace has been negatively impacted well into 2019 and 2020.

After Governor Mike Pence of Indiana signed the Religious Freedom Restoration Act, which allowed business owners to deny service to patrons based on sexual orientation, the state found it necessary to spend $2 million dollars on an ad campaign to rebuild its tourism image with travel consumers. That was in addition to 12 lost conventions and $60 million in lost revenue in the city of Indianapolis alone.

At the Bermuda Tourism Authority, we work hard to keep our research and commentary on this issue restricted to economics. That’s our lane.

The consumer economics of lesbian, gay, bisexual and transgender (LGBT) travel are this: $165 billion spent worldwide per year, $65 billion of that is spent in the United States alone.

The Bermuda tourism economy, and the workers and businesses who make it thrive, deserve their fair share of the LGBT market as we all continue the uphill climb toward tourism resurgence. Significantly, it’s not only LGBT travelers that care about equal rights based on sexual orientation.

Our research indicates many companies, consumers and travelers, including the overwhelming majority of the younger visitors powering Bermuda’s growth, care about this issue.

It’s why the fallout in North Carolina and Indiana has proven so detrimental. While it’s not possible to project the precise ramifications of a yes vote for Bermuda, we are confident the impact will be negative.

The ominous headlines since last Friday signal the hazards ahead. The yet to-be-written headlines associated with a yes vote in the Senate could be damaging enough to derail the seven consecutive quarters of growth the Bermuda tourism industry has enjoyed dating back to January 2016.

Tourism workers are getting more hours on the job, visitors are spending more of their money on-island and entrepreneurs are flocking to the tourism economy because they sense a bright future of sustained growth.

Let’s not jeopardize that growth. We should send a message that Bermuda continually and permanently lives up to its well-earned reputation as a warm, friendly and welcoming destination.

A no vote on the Domestic Partnerships Bill will make that message crystal clear to the world. If you would like to discuss this matter any further ahead of the Senate vote please don’t hesitate to reach out to me