I’ve always maintained that other people knew about me being gay before I did myself.

‘Look at the way he holds his hands,’ my grandfather would say. ‘Stop acting like a little fairy.’

But I could not butch-up any more than I could change the color of my eyes.

What gave me away? The way I walked? My feminine voice? Was it liking needlework, weaving, and knitting? Or hating football?

I had an uncle whom I adored but who delighted in calling me ‘Nancy Boy’. This was Walsall, 1988. Men were expected to behave a certain way.

I was bullied relentlessly, both verbally and physically

Other children at school told me I was a freak, and that I would die of AIDS. I was spat at. One small group wanted me dead. They wouldn’t relent.

I feared the school bell, which signaled the terrifying walk home alone, outside of the safety of school.

One day, chased by my tormentors along a disused railway line, I shat myself. My bowels opened uncontrollably and liquid started to trickle down the inside of my trouser legs and into my socks.

When I got home, I scrambled up the stairs trying not to ruin my mother’s carpets. Then, I just lay in the bath covered in my own shit and sobbed.

I wasn’t eating. I was painfully thin and I was suicidal. And no one ever talked about mental illness. Depression was not yet understood.

My mother finally went to school to find out what the hell was going on but no one ever told her why I was being plagued, not the teachers, nor me. It was shameful enough being called a poof, without having to admit what I was going through to my parents.

While I had a loving family who never went out of their way to make me feel unwanted or isolated, the message I was hearing from every other corner was that I was wrong.

I was a high achiever with potential but instead of flourishing physically and mentally I had become shy, reclusive and self-hating.

What had fostered this hostile environment? How had teenagers learned to hate me for just being me?

The narrative everyone was receiving, thirty years ago, was that ‘gay’ was unacceptable.

On television, gay people were portrayed as deviants. There were few role models, save Boy George. But. famous celebrities were dropping like flies.

Margaret Thatcher, at her most pernicious, had denounced local education authorities for teaching children that ‘they have an inalienable right to be gay’. Oddly enough her hateful speech on the subject didn’t make the Streep biopic.

In 1988, Section 28, a piece of Tory legislation prevented or at least discourage people from talking about homosexuality in schools. I was the only gay person I knew.

I was totally alone and I felt like a piece of shit.

Not even lesbians storming the news gave me hope

Even when lesbian campaigners stormed the BBC studio while Sue Lawley read the Six O’clock News live, I didn’t realize that there were others on my side.

Heroes like Peter Tatchell campaigned for equality, visibility, and changes to the law.

Princess Diana broke taboos and held hands with AIDS patients in the hospital.

But in my small West Midlands town, I didn’t know things were changing.

And in fact, rather than pushing us further into the closet, the movement kick-started by Clause 28, gave hundreds of thousands of gay men and women the confidence to come out to their friends and family, and ultimately led to the passing of law after law giving my people the same rights as everyone else.

In my debut novel, He’s Done Ever so Well for Himself, which spans the political period between Section 28 and marriage equality, my main character, Jamie, lives through similar experiences.

But it’s not all doom and gloom. His close-knit family, to some extent, live vicariously through him. Jamie, like me, finds solace in the big city, where he eventually comes into his own. Rather than being beaten by his differences, he finds refuge.

Given the toxic social climate into which he was born, would he, like many gay men, succumb to addiction or depression or other unsafe and dangerous behaviors? Or could he, through the strength of character, flourish and become the fully rounded human being that was always his potential?

Like so many others who succeeded in spite of Section 28, to become part of a galvanized community, perhaps it would be possible to become not only human but loveable. 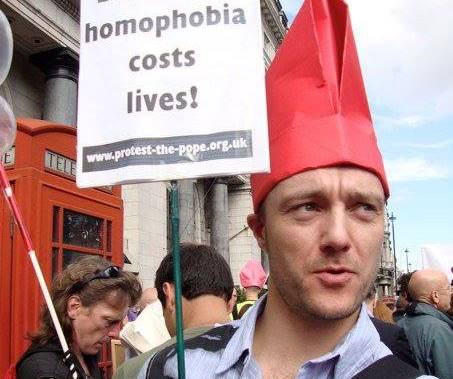 Justin at a Protest the Pope event | Photo: Justin David

At one time, we’d have done anything to not be gay

Having to be ourselves might have been a curse when Jamie and I were children, but ultimately it is what saved us. Despite the Tory legislation, despite the poisonous portrayals of homosexuals in the gutter press, we have changed the views of many, one person at a time, simply by refusing to be anyone else but ourselves.

It would be years before we’d bring home our first boyfriends: eight years for me, six for Jamie. And a long time before we’d experience the exhilaration and connectedness of our first Pride march. However, for people like Jamie and me, allowing others to know us on a human level meant we could no longer be constructed as deviants and second-class citizens.

The old ladies at the bingo hall accepted us. Employers accepted us. Our families accepted us. And while Section 28 still billed us as monsters, our reaction against it would prove to be stronger yet.

When in the year 2000, MPs of all persuasions voted massively in favor of overturning that cruel and vile act, it really did feel that on the subject of gay rights, Thatcher had been defeated.

It was, I suppose, some small comfort that she saw it overturned in her lifetime.

She had effectively laid the foundations of the gay rights movement itself.

As for Jamie and me, we came to realize that it wasn’t simply a question of our families accepting us. Now that we had grown into our own selves, it was us who needed also to accept our families.

Justin David is the author of new novel He’s Done Ever so Well for Himself.