Davey Shields is the co-host of the MenTalk Health podcast

I have a confession, lean in and listen closely… I’ve not had sex this year.  In fact, by my calculations, I have not had sex for 186 days exactly.

While for many this might seem like a travesty, it means that I can achieve a life goal that I never thought I would be able to. Something that has been out of my grasp because of my sexuality and my healthy appetite for sex.

I sat there at the Glasgow blood bank surrounded by fellow donors as Emma took 450ml of my fabulous blood. I felt smug, and even proud that I hadn’t had any sex for as long as I had. It felt good to be giving my blood, especially when I remembered why I wanted to do it so badly.

Last week, a friend of mine posted on social media his joy at being able to make an appointment at the blood bank. My first thoughts were of complete, emphatic joy. My friend, Marc, more than most people knows why giving blood is so important. Marc’s father was very ill for a very long time. For Marc, when he would have done anything to help his dad in any way, the fact he couldn’t donate his blood broke his heart.

Realizing I could finally donate blood 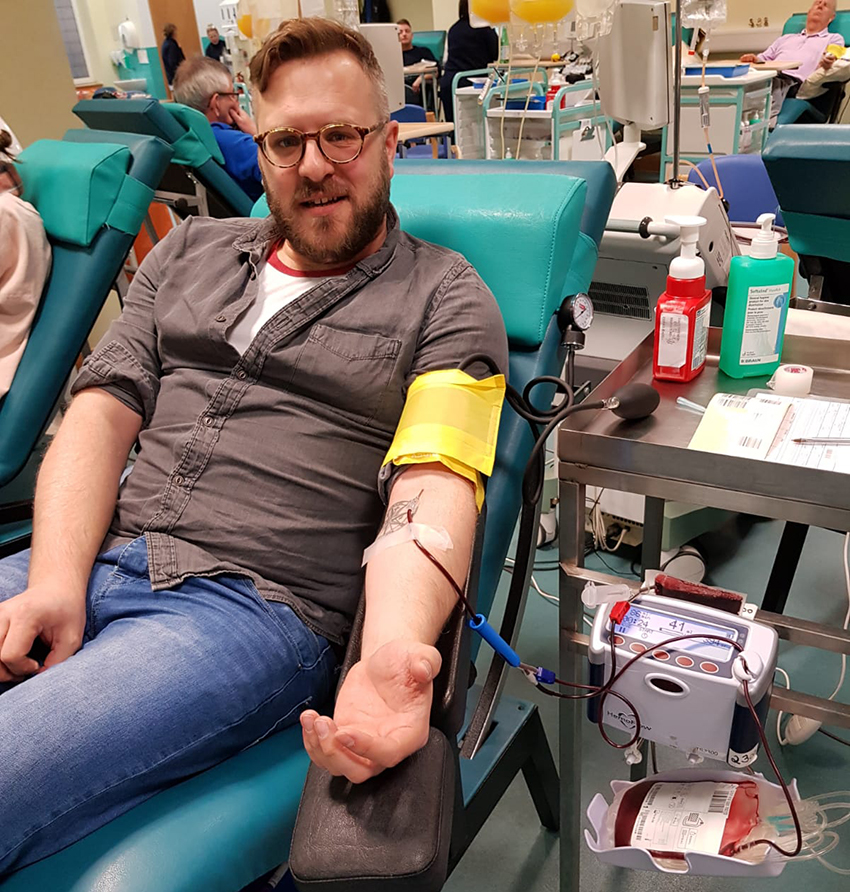 It was only later, as I counted out my days, that I realised that I too could donate…by quite a margin!

As of 28 November 2017, men who have had sex with men can give blood three months after having sex. Before then it was a 12-month abstinence, and before that a lifelong ban if you had ever had sex with another man.

It does still hurt deeply that my blood is seen as somehow dirty and, even now, to give my blood I have to subject myself to clinical standards that make me feel as somehow ‘less than’ those who can give blood without abstaining from sex.

This article, however, isn’t about the rights or wrongs of gay men giving blood. Instead, it is down to the surprising reaction I have seen from other gay men on my social media feed and on others.

Their reactions break down into two groups:

Why are people uninformed?

The first group alarmed me because it means that people in our community aren’t informed. Many of these people have been waiting for years to be able to give their blood but still don’t know that the rules have changed. How can this be?

The second group is the more troublesome one.  After years of fighting for the right to give blood, why are we so quick to shame and laugh at those of us who might in fact be eligible? Not one of the comments I saw was mean or cruel, it was all said in good fun. However, it is sad that even in an emotional post for Marc about finally being able to give blood, he still felt the need to joke about his supposed nun-like state (believe me, that boy ain’t no nun!). In my own post I went on to explain, with a well-placed Romy and Michele gif, how I’d been far too busy with my work to bother with sex. Why was I so concerned about explaining why it had been so long since I had ‘known’ a man?! Why does it matter? Especially when something good is coming from it.

Many of us in the LGBTI community may never be able to give blood, yet it is something we have fought for. Regardless of what many say about it being a health protection, the years of gay and bi men being unable to give blood was always a kick to the gut to us. It does breed an opinion that we, as men who sleep with men, are less. That we are dirty. It definitely adds to the unfair stigma already attached to those in our community living with HIV. Even with this change, this three-month window still has a very bitter taste.

‘Let’s show that our gay blood can save lives too.’

It may not be the terms that we want, but the bigger picture here is adding to the national blood bank. Let’s show that our ‘gay’ blood can save lives too. We should be embracing the opportunity whenever we can to give blood.

I propose this: let’s start owning our sexual droughts, be they chosen or forced. Let’s admit that it has been a while but feel empowered enough to find our nearest blood bank and give blood!

Don’t misunderstand me, I love sex. But here I am, a blood donor, and I feel great to finally be able to do it.

I can give blood again in 12 weeks. I have a decision to make…