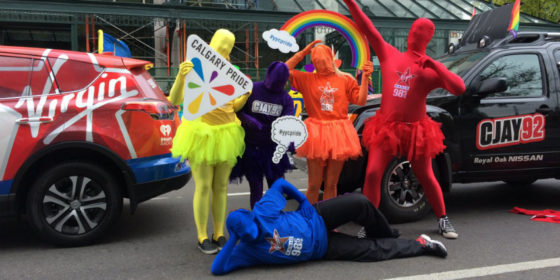 The city’s pride organization released a statement Wednesday delivering conditions for Calgary’s Police Services’ (CPS) involvement in the parade taking place on 3 September. Calgary Pride, CPS, and VOICES, a local coalition of Two-Spirit and racialized LGBTQIA+ community members, made the decision together.

The statement acknowledges two conditions. First, CPS can only participate in the event ‘without uniforms, firearms, vehicles, or any forms of institutional representation, such as floats etc’.

The second condition is that CPS Chief of Police Roger Chaffin, Deputy Chief of Police Sat Parhar, and the Senior Executive team of CPS will participate in a formal Diversity and Inclusion training ‘prior to displaying institutional representation within future Calgary Pride activities’.

‘We acknowledge the historical oppression and institutionalized racism faced by queer/trans people of colour and Indigenous persons, and the potentially negative association with weapons, uniforms, and other symbols of law enforcement,’ the statement reads.

However, the police are not banned from the event, VOICES reinforced in a Facebook post. CPS was present at the meeting, which resulted in this decision, and will still provide security at the event.

Despite this, Chaffin told the Calgary Herald the department is ‘disappointed’ with the decision but will not ‘allow it to undo decades of progress between law enforcement and the LGBTQ community in Calgary’. He continued: ‘We have a far better relationship with the LGBTQ community now than we did even 10 years ago and we want to keep that forward momentum.’

Last year, Black Lives Matter Toronto staged a sit-in during pride and demanded the removal of police floats. Pride Toronto accepted and endorsed the demands in a vote. This spurred a larger conversation about police involvement in pride events.

Gay Star News reached out to CPS for comment.