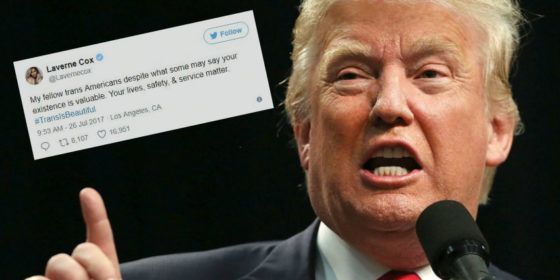 On Wednesday morning, Donald Trump announced a ban on transgender people serving in the US military in ‘any capacity’.

Responses to the ban have been swift and strong, from the likes of celebrities, politicians, and human rights organizations. While social media may give Trump the opportunity to blast policy and thoughts, it importantly allows for critics to voice their anger and resistance as well.

Politicians react to the ban

Several politicians have already spoken up regarding the ban, both from the United States and elsewhere.

US Representative Joe Kennedy III took to the House floor to deliver a powerful statement regarding the ban:

Our soldiers do not discriminate. They defend all of our nation’s people. Their government owes them that same decency in return. pic.twitter.com/ZQBsHhbnV8

Congressman Mark Pocan of Wisconsin and a member of the LGBT Equality Caucus also voiced displeasure with the decision, calling it ‘completely outrageous’.

This is discriminatory, and un-American. To the transgender servicemembers who defend our nation, I stand with you. https://t.co/CqgWIeClzb

Senator John McCain, who was recently diagnosed with brain cancer, is a chairman of the Senate Armed Services and released a statement regarding Trump’s tweets being ‘premature’. According to the statement, which can be read in full below, transgender people currently serving will be able to continue their service. Going forward, those who meet ‘current medical and readiness standards’ should be able to serve.

Every patriotic American who is qualified to serve in our military should be able to serve. Full stop.

Across the pond, Jeremy Miles, Assembly Member for Neath and patron of LGBT Labour Wales tweeted his own statement:

Trump’s attack on trans people is utterly shameful. We will not allow him to stop the march toward full equality. pic.twitter.com/dpwCBjKwbM

Organizations react to the ban

Groups and organizations for human and LGBTI rights around the world quickly released statements regarding the ban and their condemnation of it.

Tarah Demant, the director of Amnesty International USA’s Gender, Sexuality and Identity programme put forth the following statement: ‘Today’s announcement violates the human rights of all transgender Americans. It lays bare the president’s prejudice and underlines the fact that creating policy based on bigotry is becoming a dangerous and cruel pattern for President Trump. The administration continues to target minority communities without pause and without facts. From stripping protections from transgender students to today’s announcement, the Trump administration has made clear it has an agenda of discrimination.’

The Human Rights Campaign Twitter feed has been active, re-tweeting others’ support for trans troops as well as tweeting their own statements. Via the HRC Twitter, Eric Fanning, the first openly gay appointed-official to serve as Secretary of the Army, wrote an inspiring and powerful Twitter thread in support of those serving:

Hello, this is @EricFanning – the 1st openly gay appointed-official to serve as Sec. of the Army under President Obama. #HRCTwitterTakeover

Rebecca Stinson, Head of Trans Inclusion at Stonewall, said: ‘Donald Trump’s latest tweets are outrageous and a wakeup call to anyone in the LGBT community who thought their rights were safe. Not only are they inaccurate, they also serve to demonise trans people. With these statements, the President of the United States has sent a clear message –  his administration will not treat trans people equally. We’re now reaching out to LGBT activists and organisations in the US to offer support.’

OutServe-SLDN, a nonprofit and nonpartisan association to help achieve LGBT equality in the US military, released the following statement: ‘In his latest example of pseudo-policy-by-twitter, Donald Trump has shown blatant disregard for transgender service members who have been serving openly since October 2016. The disruptive burden to the military comes from indecision in a White House which itself is not focused on victory if it’s targeting service members. The readiness, effectiveness, and lethality of the Armed Services comes from the commitment of our troops – not the vagaries and bigotry of exclusionary policies. We are committed to transgender service members. We are going to fight for them as hard as they are fighting for the country. And we’re going to start by taking the fight to Donald Trump in the Federal Court.’

GLAAD and other organizations like the Women’s March and Lambda have taken to simply repeating a single phrase:

Public figures react to the ban

Various celebrities and public figures continue to be more and more vocal on social media regarding political matters and Wednesday morning was no different.

Jake Tapper, a CNN journalist, wrote a Twitter thread on studies of transgender people serving in the military and Trump’s campaign of supporting LGBTI rights:

My fellow trans Americans despite what some may say your existence is valuable. Your lives, safety, & service matter. #TransIsBeautiful

Several other celebrities and public figures also continued to show their encouragement and backing of transgender people who serve and want to serve.

We should be grateful to the people who wish to serve, not turn our backs on them. Banning transgender people is hurtful, baseless and wrong

Donald: With your ban on trans people from the military, you are on notice that you just pissed off the wrong community. You will regret it.

no. My God. This must be challenged. https://t.co/H9DBE4cmK7

I grew up in a military w/ LGBT people serving in the shadows. We can’t let DT turn back the clock on our brave, trans soldiers. #RISEUP

As trans women and men We have never asked for anything other than to live our life as our authentic self this hate has to stop!

After consultation with our staff, here is our current statement regarding @POTUS‘s transgender service tweets. “FUCK YOU.”

Actor Zoe Kazan tweeted her support, calling people who serve stronger than Trump, and then sent this message to her fellow actors…

Hey! If any of you actors are in a press junket today, I’d like to remind you that’s a position of power. You could turn the conversation…

… to which filmmaker and actor Jay Duplass responded: ‘On it.’

Finally, Busy Philipps sent a necessary reminder to her followers:

Oh, just a reminder that this–NONE OF THIS IS NORMAL.